Try this Spaghetti alla Carbonara recipe, or contribute your own.

For the breadcrumbs, toast crumbs in oil in a salute pan over medium heat until golden and crisp, 5 min. Transfer crumbs to a bowl and toss with parsley and zest, then season with salt.

For the carbonara, cook bacon in a large sauce pan over medium until cooked through, but not crisp; drain. Add wine and lemon juice, and reduce until nearly evaporated, 4-5 min. 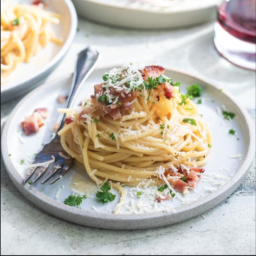 jklaube
Was very quick and easy. Made with Fusilli so even better. Rob said it needed a little something, and while he was right I realized afterward that I forgot to put on the breadcrumb topping (I made it, just forgot it). Might put in a little more bacon, like maybe 8 slices
8m
Reply
Reply