This is Spain's answer to the One-Pot Party meal. Redolent with saffron and spices this looks, smells, and tastes wonderful.

Make the sofrito: In a skillet heat 2 tablespoons olive oil. Add the onion and pepper, and cook until softened, about 2 minutes. Add tomatoes, thyme, basil, cumin seed, bay leaf and garlic. Season with salt and pepper. Cook the mixture for 5 to 7 minutes, or until almost all the liquid has evaporated. Set aside.

To assemble the paella: Preheat the oven 400 degrees. In a saucepan bring the broth to a simmer over moderately high heat, add the saffron or turmeric and let the mixture steep for 5 minutes. In a 14-inch paella pan or a large deep ovenproof skillet, arrange the rice, chicken, sausage or ham and sofrito. Add the prepared broth, bring the liquid to a simmer over high heat, stirring, and immediately remove the pan from the heat. Arrange the shellfish in the pan and bake the paella on the floor of the oven for 25 minutes. (Do not stir the paella during cooking. If the mixture becomes dry, add the additional broth.) Add the peas and bake the paella for 10 minutes more, or until the liquid is absorbed and the mussels have opened. Let the paella stand, covered with a dish towel, for 5 minutes before serving. Serve the paella in its dish garnished with the cilantro and lemon wedges.

The key to Paella is "Put what you've got ... in the pot" Seafood, Sausage, Chicken, Rabbit, it's all good. 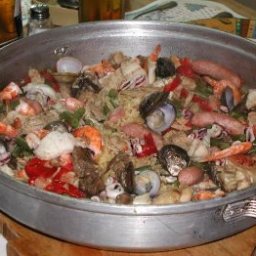 breckhawkins
This was a huge hit and plus I did it on my BBQ...way different flavour!!
2y
Reply
Reply

judybooty2
This was an awsome dish. I only ch a nged the mussels to shrimp and added it last. All my friends loved it. Oh I did use couscous In stead of rice.
7y
Reply
Reply

lozachops
Omg! Made this last night. It was so tasty, much more flavour than other paellas I have tried in the past. Yum yum!
9y
Reply
Reply

misterfrost
Next time, I will add the mussels later, they were completely dried out. Other than that, wonderful recipe!
9y
Reply
Reply

promfh
[I made edits to this recipe.]
14y
Reply
Reply

promfh
The key to Paella is "Put what you've got ... in the pot" Seafood, Sausage, Chicken, Rabbit, it's all good. [I posted this recipe.]
14y
Reply
Reply