Try this Spanokopita (Greek Spinach Pie) recipe, or contribute your own.

If you are using fresh spinach, wash the spinach and remove the tough stems. Place in a large bowl and sprinkle heavily with salt. Rub the salt into the leaves by taking them up, a bunch at a time, and rubbing them between your hands; the volume of the spinach will decrease before your eyes. Tear the spinach up as you do this. Rinse the salt off thoroughly and dry the spinach, squeezing it in bunches in a towel. (If you are using frozen spinach, just let it thaw and squeeze out excess moisture). Saute the onion and mushrooms in a little olive oil and butter with the garlic and salt and pepper to taste. When both the onions and mushrooms are tender, remove from the heat. Beat the eggs in a large bowl and crumble in the feta cheese; add the Parmesan, then the spinach, onions, and mushrooms. Stir in the parsley, oregano, rosemary, some freshly ground pepper, and a little salt (remember that the feta is very salty). Preheat the oven to 375 degrees. Melt the butter and brush a 2-quart or 3-quart oblong baking pan with it. Spread your filo dough out flat next to the pan. Take a sheet and lay it in the pan, letting the edges come out over the pan. Take another sheet and lay it on top of the first, not directly but in such a way that its edges extend over different parts of the pan. Brush with butter. Continue to layer the sheets of filo, brushing every other one with butter and turning each one slightly so that the edges fan out over the sides of the pan, until you have about eight sheets left. Now spread the spinach mixture evenly over the filo dough in the pan, pushing it into the corners. Take the edges of the filo and fold them in over the spinach mixture. Take the remaining sheets of filo and layer them one by one over the spinach mixture, again brushing every other sheet with butter, but this time pushing the edges down into the sides of the pan. It is difficult to do this neatly; just rumple the edges down into the sides of the pan (they will form a nice crisp edge after baking). Brush the top of the spanokopita with butter and make +-inch-deep diagonal slashes across it with a sharp knife. Bake for 50 minutes, until the crust is puffed up and golden; it will shrink from the sides of the pan. Cut into squares or diamond shapes and serve immediately. File ftp://ftp.idiscover.co.uk/pub/food/mealmaster/recipes/mmdja006.zip 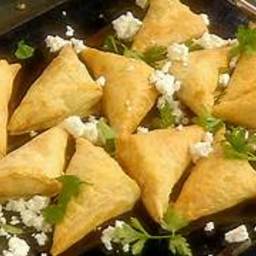 ninmah
This recipe is a favorite of mine. I've made it many times and it comes out perfectly each time. Crispy, savory, and delicious with a crisp salad. Highly recommended.
10y
Reply
Reply