It's a staple of many runners' diets, but spaghetti can quickly become boring. Spice it up with the intense flavours, colours and nutrients of chilli, tomatoes and black olives. The red wine provides an extra tang, but teetotallers can leave it out or replace it with stock

1 Bring a large pan of salted water to the boil. Meanwhile fry the chorizo over a low heat for three to four minutes, until the oil has run out of the sausage. Discard all but two tablespoons of the chorizo oil.

2 Remove the leaves from the rosemary stalks and finely chop. Add the onion, garlic and rosemary and cook for three minutes. Then add the chilli, wine, tomatoes and tomato puree, and bring to the boil, stirring occasionally. Cover and simmer for five minutes, then simmer uncovered for a further five minutes.

3 Add the spaghetti to the boiling salted water, return to the boil, and then simmer for 10 minutes. Drain well and add to the sauce in the pan.

4 Add the olives and parsley to the spaghetti and toss until well mixed. 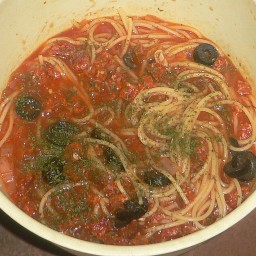