For this recipe, I think it's a perfect match for something like pork. A pork chop, or a roasted pork loin. Smoked turkey breast? What about a roasted chicken. Perfect! This is a perfect accompaniment to pork and poultry, but ... I'd skip the fish ... and the red meats with this one. For whatever reason ... my brain says no.

Ah, this particular dish is just outstanding, by the way! It's like a thick, creamy and velvety pudding. It's a bit of extra work to make and does require a quick roux is made from the tapioca flour, but the end result is a silky smooth texture, blended with the colorful vegetables, it makes for a special side dish ... no matter WHAT my history would have you believe. Enjoy this one. WELL worth the effort! 8.53g carbs serv

Bring a medium sized pot of water to a boil, over high heat.

Gather a bowl with ice cubes and water, as well as a colander or straining device, of some kind. Once the water boils, add a nice amount of salt. Place your spinach into the boiling water and allow to swirl around for about 30 seconds. Remove the spinach with the strainer and immediately plunge it into the ice water. When it is thoroughly cooled, remove the spinach and squeeze it, by clinching it in your fists (or with a cloth), until all the water has been squeezed out. You should have a sizeable lump of bright green cooked spinach.

Coarsely chop the spinach and set in a small mixing bowl. Add the roasted peppers and mix. Evenly distribute the mixed spinach and pepper mixture along the bottom of the casserole pan.

Place a medium sized sauce pan on the stove over medium heat. Melt the butter and add the onions and garlic with a bit of salt and pepper. Cook until the onions are translucent, about 3 to 5 minutes. Add the tapioca flour and stir in and cook for a further 3 to 5 minutes, stirring occasionally.

Quickly whisk in the cold cream and almond milk. Bring this mixture up to a slow simmer. Once it is simmering, whisk in the grated cheese. Taste the sauce and adjust with a bit of salt and pepper.

In a medium mixing bowl, place your four eggs. Carefully and quickly whisk about 1/4 of the hot cheese sauce. You want this to be quick and incorporate the eggs ... not "scramble" the eggs. Once this is whisked in, whisk in the remaining sauce.

Pour your pudding base over the top of the spinach mixture, in an even layer. Bake for about 45 to 55 minutes or until golden, firm and lightly puffed in the center. Remove and allow to rest for 15 minutes before serving. 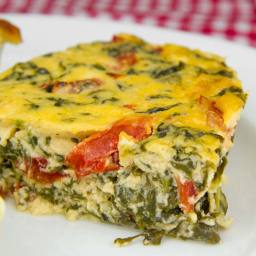