Great creamy rich and flavorful soup good as a side dish or as a meal in itself.

Cut the Ham steak in to bite size cubes.

Place the ham and the bone in a stock pot and brown at med-high heat.

Remove the stock pot from the heat and place the ham in a med bowl to be added to the soup later. Add the 2 tablespoons of honey to the ham and mix well and set aside.

Chop the onions and the garlic in small chunks and add the stock pot with the ham oil and residue from browning.

Sauté the onions and garlic in the ham oil until they are soft and starting to brown.

Add the Chicken and Beef Broth to the onions mixture and add an additional 32oz of water.

Heat until the soup is boiling.

Turn down heat to a low simmer.

Slice the carrots and celery and add to the soup base.

Wash the split peas in a strainer until clean, and then add them to the soup.

Simmer for about an hour until the peas are completely soft.

Add salt and pepper to taste.

Remove the ham bone and the bay leaves and serve. 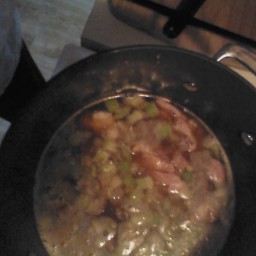 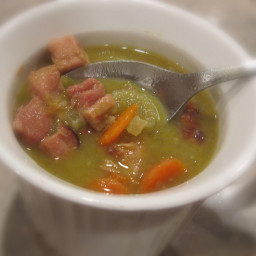 RSTN8R
This was fantastic and the family loved it.
2y
Reply
Reply

talbotcolleen
Awesome soup. I doubled the recipe and I'm glad I did... the taste was out of this world. Adding the hint of honey to the ham after searing it is a stroke of genious.... the flavour was exceptional. I'll delete all other split pea recipes because this one will be my go-to recipe from now on!
4y
Reply
Reply

sheilalynne
First time making this soup which I never liked, it was great husband loved it but needs to simmer longer than an hour to soften peas more
6y
Reply
Reply

annmartinson
had this last night, it was delicious. easy to make and perfect consistency. I actually followed the directions and the water to dried pea ratio was perfect! I used leftover ham chunks that were too dry and by the time they were soaked for an hour in the stew they were rehydrated and delicious. This recipe fed four hungry males plus me for our main course. Everyone had a very generous bowl and two had seconds. Thanks!
8y
Reply
Reply