This vegetarian revelation balances the meaty sweetness of butternut squash with bitter broccoli rabe and a creamy sauce. Serve it with a simple salad.

FILLING: Preheat oven to 400°. Place squash and 3 Tbsp. oil in a large bowl; season generously with salt and pepper and toss to evenly coat squash. Transfer to 2 rimmed baking sheets, spreading out in a single layer, overlapping slightly. Roast until tender but not mushy, about 15 minutes. Let cool.

Mix mozzarella and next 5 ingredients in a large bowl; season with salt and pepper. DO AHEAD: Squash, broccoli rabe, and cheese mixture can be made 1 day ahead. Cover separately and chill.

BÉCHAMEL AND ASSEMBLY Melt butter in a

Reduce heat to low and cook, thinning with more half-and-half if too thick, until sauce is a milk shake-like consistency, about 10 minutes longer. Season to taste with salt and pepper. Strain through a fine-mesh sieve into a medium metal bowl. Set bowl over a large saucepan of gently simmering water. Cover and keep warm.

Cook lasagna noodles in a pot of well- salted boiling water until still quite al dente, 8-9 minutes. Transfer immediately to a large bowl of ice water to cool. Drain; spread out noodles on a kitchen towel or baking sheets lined with parchment paper, placing a kitchen towel or parchment between layers.

Ladle about 1/4 cup béchamel into a 13x9x2" baking dish; spread evenly over bottom. Line dish with a single layer of noodles, cutting as needed to fit (use large scraps in subsequent layers). Layer 'A of squash over. Scatter 'A of broccoli rabe over. Dollop 'A of ricotta mixture randomly over greens. Drizzle 'A cup béchamel

evenly over ricotta mixture. Repeat process 2 more times for a total of 3 layers, finishing with a layer of noodles. Spread remaining béchamel over; top with Parmesan.

DO AHEAD: Lasagna can be assembled

1 day ahead. Cover and chill. Return to room temperature before continuing.

Preheat oven to 375°. Bake lasagna uncovered until bubbly and starting to brown, about 45 minutes. Turn oven to broil. Cook until browned and golden, 4-7 minutes. Let rest for 20-30 minutes before serving 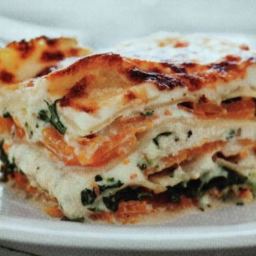