An old favourite - a traditional steak and kidney pie, comfort food at its best.

It's important to cook the meat a day ahead, so that you can discard any fat that has risen to the top, and so that the pastry doesn't slump in the face of a too-warm filling, so up to 48 hours ahead -make the pastry. Whizz the flour and a pinch of fine sea salt together for a few seconds in a food processor, then add the butter and whizz until the mixture looks like coarse breadcrumbs. Whisk together the egg yolk and 3 tbsp water and whizz with the pastry until it collects in a ball. Wrap in cling film and leave it to rest in the fridge for at least one hour.

Cut button-mushroom-sized lobes of kidney from the white central core (discarding). Cut the beef into bite-sized cubes and cut the mushrooms into chunks.

Heat 1 tbsp of the oil in a large, heavy frying pan over a medium-high heat. Throw in the kidney and fry until lightly coloured. Tip into a colander to drain.

Wipe out the frying pan and return it to a low-medium heat, adding 25g/1oz of the butter and 1 tbsp oil. Tip in the onion and fry for 10 minutes, stirring occasionally, until soft and slightly golden. Transfer to a large casserole, using a slotted spoon.

Preheat the oven to 160C/gas 3/fan 140C. Tip the 85g/3oz flour into a large plastic bag, and season it generously. Throw in the beef and shake until lightly floured.Return the frying pan to a mediumhigh heat, adding a little more oil and butter if needed. Shake off any excess flour (reserving it) then fry the beef in batches until golden-brown. As each batch is done, transfer it to the casserole.

Adding more oil and butter to the frying pan if necessary, fry the mushrooms for about 2 minutes until starting to wilt, then add them to the casserole with the drained kidneys, hot water, bouillon powder and bay leaf, plus the excess flour in the bag if you like a thick gravy. Stir well, cover and cook in the oven for 75-90 minutes until the meat is tender and the sauce is thick. Cool thoroughly, then put in the fridge (preferably overnight) so any fat will solidify - it can then be skimmed off and discarded.

In the morning - return the pastry to cool room temperature, then roll it out thinly on a wellfloured surface. Invert a 28-30x23cm, 6.5cm deep pie dish on to the pastry. Mentally add an extra 1cm all round, then use the dish as a guide to cut out the pastry lid. From the remnants, cut out enough 6cm-wide strips of pastry to go round the dish - they should cover the flat rim and about halfway down the insides.

Lightly butter the rim of the dish and line it with the strip(s) of pastry, sealing any joins with a little dab of water. Butter the shoulders of a pie raiser or an upturned egg cup and stand it in the middle. Spoon in the meat mixture to come level with the top of the dish. Don't overfill: reserve any excess gravy to serve hot with the pie.

Brush the pastry rim with a little water, then drape the pastry lid over it, pinching the edges to seal. Cover with cling film and keep in the fridge if not baking immediately.

Finally, an hour before serving - preheat the oven to 200C/gas 6/fan 180C. Make four slashes in the lid of the pie, then brush with the egg wash. Bake for 35-45 minutes until the pastry is golden brown, turning the heat down 10-20? after about 20 minutes. Remove the pie from the oven and leave it to rest for around 10 minutes before cutting into it. 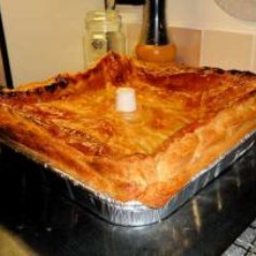