There’s always Stilton left after Christmas. Use it to make little cheese-on-toasts, topping them with a salt spoon-full of chutney or the easy gently spiced pears in the recipe. (You’ll have more spiced pear than you’ll need: keep the extra to eat with cheese at the end of a meal). The pears can be made three days ahead. All but the final baking of the rarebits can be done three hours ahead.

1 First make the spiced pears. Mix the red wine, honey, and a good dollop of chilli sauce in a small pan.

2 Slice the pear crossways into 3mm thick circles (no need to peel or remove the core).

3 Bring the pan to a simmer and drop in the pears.

4 Simmer for 20 minutes or so, until the pear is soft and the liquid reduced to a thick syrup. Turn the pear every now and then to make sure it absorbs the liquid evenly. Leave to cool.

5 Butter the bread on both sides and put in the oven for seven minutes or so until golden.

6 Mash the Stilton and the egg together to make a nubbly paste.

7 Divide between the two pieces of toast and return to the oven for 10 minutes or so until browned.

8 Trim off the crusts and cut into squares. Cut the larger pear pieces into quarters. Top each rarebit with a bit of pear. 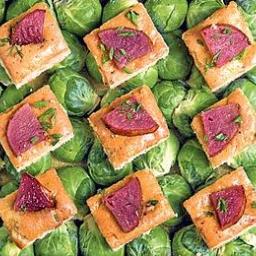