Try this Strawberry Lemon Bavarian Cake recipe, or contribute your own.

Make the shortbread: In a bowl cream together the butter, the sugar, and the vanilla, add the flour,the baking powder,and the salt, and stir the mixture until it forms a dough. Spread the dough evenly in the bottom of a 10-inch springform pan and bake it in the middle of a preheated 350F. oven for 20 to 25 minutes, or until it is golden. Let the shortbread cool and chill it in the pan for 15 minutes. Make the Bavarian: In a small saucepan stir together the lemon juice, the sugar, the liqueur, and 2 tablespoons water, sprinkle the gelatin over the mixture, and let it soften for 1 minute. Heat the mixture over moderately low heat, stirring, until the sugar and the gelatin are dissolved, set the pan in a bowl of cold water (do not add ice), and stir the mixture until it is just cool but still liquid. In a chilled large bowl with an electric mixer beat the cream until it holds soft peaks, with the motor running add the lemon mixture, beating until the mixture is just combined, and fold in the diced strawberries gently but thoroughly. Pour the Bavarian into the springform pan and chill it, covered, for 4 hours, or until it is set. The cake may be made 1 day in advance and kept covered and chilled. Remove the side of the pan, transfer the cake to a plate, and garnish the top and side with the halved strawberries. Gourmet March 1991 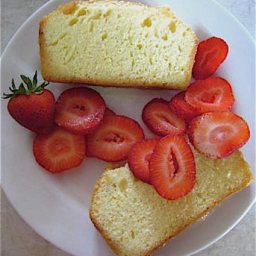