Try this Stuffed aubergine recipe, or contribute your own.

Chill the shrimp in the freezer in a bowl with 1 teaspoon each of salt, sugar, and water for a few minutes.

Drain the shrimp. Using a cleaver or other knife, whack each piece of shrimp so it is flattened, which will help with binding the mixture together later. Then chop the shrimp into a mince, and add ½ tsp pepper,¼ tsp salt, and ½ tsp cornstarch to combine.

Slice each eggplant on the diagonal, about 1½-inch thick. Then slice through the middle, but not all the way, to create a pocket for the shrimp. The end pieces can be cooked unstuffed with the rest of the dish.

Fill each eggplant slice to the top with about a tablespoon of the shrimp mixture.

Heat a pan over medium-high heat with ¼ inch of canola oil. Working in batches, fry the eggplant slices for a couple minutes on each side until browned and then move the slices to a plate.

Return all the eggplant slices to the pan, add ½ cup water, and cover. Steam for 7 to 10 minutes, until the eggplant is soft and easily pierced with a knife, and the shrimp is pink and cooked through. Do not overcook, or the shrimp will toughen and the eggplant wi The end pieces may take longer to cook.

In a small bowl, combine the oyster sauce, mirin, the other ½ tsp of cornstarch, and 2 tbs water, then add to the pan and stir. Cook for 2 minutes, until sauce thickens. Move the eggplant and sauce to a plate. Add the garlic and chopped scallion and cook for a minute, then sprinkle over top of the dish. 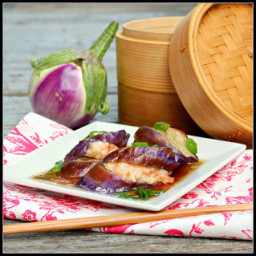 Stuffed aubergine with feta and pomegranate

Stuffed aubergine with lamb and haloumi