I love roasting my own peppers, so when I found some extremely large, perfectly shaped red peppers I knew I had to get my hands on them. Also, I had some ridiculously large chicken breasts in my fridge. In order to keep them from drying out during cooking, I decided to stuff the chicken breasts with whatever I found floating around the fridge. This is kind of a "fly by the seat of your pants" recipe, but sometimes those are the most fun.

As the peppers are sweating, you'll want to butterfly your chicken breast and season both sides with salt and pepper. I crumbled some goat cheese and rolled it around in some Herbes de Provence. Once your peppers have been peeled, lay one thick strip on one side of the chicken and top it with goat cheese. Lastly, you'll want to close your chicken breast much like a taco shell.

If your chicken is over-stuffed (like mine was) you'll want to truss the breast using butcher's twine in order to keep the breast from falling open during cooking. Simply sear the chicken for 3 minutes on each side until it's golden brown and finish in a 400 degree oven for 7 minutes.

I wanted a very light sauce for this dish since the chicken is very heavy. In a sauce pan, I browned a bit of minced garlic in olive oil, then deglazed with lemon juice. When the lemon juice had reduced by half I added heavy cream and reduced that by half as well. Heavy cream takes on a very nutty flavor as it reduces, so this sauce will taste of zested nuts. I added a touch of white pepper and salt, but not a lot. I really wanted this sauce to be light and not take anything away from the flavors inside the chicken.

When the chicken was done cooking, I set it aside to rest. Using the same pan, I tossed in a handful of leftover diced peppers, sugar snap peas, and some baby portabello mushrooms. I served the chicken over the vegetables and drizzled with a bit of the citrus cream sauce. 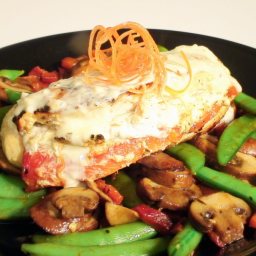