Family favorite. Prepare the night before, in the morning just pop in the oven. Left overs freeze well, reheat in the oven for best results.

In a large glass bowl, melt butter in microwave. Mix in eggs, milk and maple syrup with hand mixer or blender until well combined. Pour egg mixture evenly over bread and cheese cubes. Sprinkle with ground Cinnamon or Cinnamon-sugar. Cover with plastic wrap, then press layers down to moisten. Refrigerate 2 to 24 hours.

Apple Cider Syrup: In a glass bowl stir together the sugar, cornstarch, and cinnamon. Then stir in apple cider/juice and lemon juice. Cover bowl with wax paper and cook in microwave till mixture is thickened and bubbly, removing every minute or two to stir. Cook another 1-2 minutes after mixture is thickened and bubbly. Stir in the butter till melted.

Our family likes Cinnamon-sugar sprinkled between layers and on top. 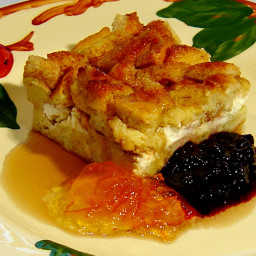