These make an excellent appetizer. You can freeze them - that is if you can keep from eating them all up when they first pop out of the oven.

Cut the butter in half, and put one half in a small pan to melt. Half the remaining half of butter and put it into a saute pan. Add half the shallots and half the oil, and saute just until the shallots turn translucent, about 30 seconds. Add the mushroom caps to the pan (you will probably have to do that in two or more batches), and swirl/shake the pan so that all get a little butter/shallot on them. Place these on a cookie sheet, and continue with remaining caps until all the caps have some butter/shallot on them.

Take the remaining oil, butter and shallot and put it in the same saute pan, and saute until the shallot is translucent. Add the minced mushrooms, green onions, Italian seasoning, salt, apple and walnut. Add the sherry and saute for about five minutes, or until the mushrooms have released their juice, and that juice has been reabsorbed.

Put into a bowl and add the bread crumbs and melted butter. Mix thoroughly, then start stuffing the mushroom caps.

Put into a 350 oven and bake for 20 minutes. Cool before eating.

To freeze, put the mushrooms on a cookie sheet. Freeze them uncovered on the cookie sheet, just until frozen, about 1 hour. Place them between layers of wax paper in a storage container and return to the freezer. 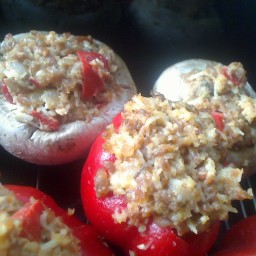 Waiting to be steamed 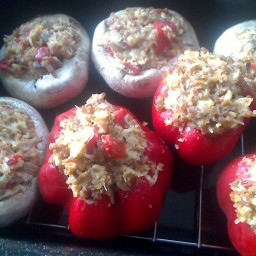 wonderfulwendy
This was not too complicated to make. I Think the end product taste reminded me of pacific stuffing - but this way at least I knew what was in it.
11y
Reply
Reply

Shepp6
Not to good,would not use again !!
11y
Reply
Reply

arbpen
Alternate ingredients: Substitute Herbs de Provence and add blue cheese for a French version. Substitute pan roasted pinenuts for walnuts, celery for apples, add basil and use olive oil to make a Pesto version. To freeze, put the mushrooms on a cookie sheet. Freeze them uncovered on the cookie sheet, just until frozen, about 1 hour. Place them between layers of wax paper in a storage container and return to the freezer. [I posted this recipe.]
12y
Reply
Reply