Try this Stuffed Peppers Mix & Match recipe, or contribute your own.

Slice the tops off 6 bell peppers and remove the seeds, drizzle the insides with olive oil and season with salt. Arrange cut-side down in a 9 x 13" baking dish and bake 400 degrees until softened but not collapsed, about 20 min.

Meanwhile, heat 2 tablespoons olive oil in a large nonstick skillet over medium-high heat. Add 1 lb of protein; season with salt and pepper. Cook, breaking up any meat with a wooden spoon, until browned, 5 - 6 min. Remove to a plate and wipe out the skillet.

Add 3 minced garlic cloves to the vegetables and cook 1 min. Stir in 1 tbs of dried spices, then add 2 tbs tomato paste and cook, stirring, 1 min. Add one 15oz can diced tomatoes and stir with a wooden spoon, scraping up any browned bits in the skillet.

Stir in 1 cup (unless noted) from Group A and 2 cups (cooked) from Group B. Return the cooked protein to the skillet and stir to combine; season with salt and pepper.

Divide the filling evenly among the peppers, packing it down. Arrange upright in the baking dish, cover with foil and bake at 400 degrees until heated through, 20 min. Uncover and top with 1 cup topping and 2 tbs olive oil. Return to the oven and bake until the tops start browning 6 - 8 min. 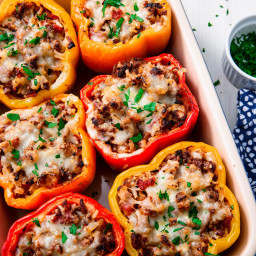 jklaube
Great recipe for its options. Perfect leftover kind of meal, or one when you don't want to go grocery shopping and just use what you have. I did our homemade sausage, 15oz of fresh cherry tomatoes from my garden, mushrooms, curry powder, pinto beans, white rice, shredded Mexican cheese
11m
Reply
Reply