Many drink recipes call for Sugar Syrup. This version works in those recipes and is Diabetic-Friendly. It's also adaptable to other flavors beyond simply sweet.

Dissolve Splenda in water and allow to cool. Strain through a coffee filter to remove sediment. Use wherever a recipe calls for simple syrup.

NOTE: This recipe seems to work best with sucralose sweeteners. I didn't have as much success with the Pink or Blue products. Beyond the obvious differences in proportions, the other products didn't give me a syrup-like consistancy and the flavors weren't as "clean".

While I used Splenda, there are now generic or house brand sucralose sweeteners that work as well. Don't, however, confuse *Splenda for Baking* with bulk Splenda. The baking and brown sugar versions of the Splenda product are 50% sucrose (sugar). I will have to assume that any generic and house brand baking products will be similar in content. It's important to read the product lables to know what you're dealing with. The version with maltodextrin and sucralose is what is called for in this recipe. The versions that also contain sucrose aren't suitable for this particular purpose. However, they are great for baking and other recipes that require some sugar to make the dish come out properly.

Each (1TBS, 13g) serving of the basic syrup has an estimated:

All other nutrients are zero.

VARIATIONS: You can flavor this syrup for other uses.

Orange (or Lemon) syrup: Add the zest of one orange (or large lemon) and about a tablespoon of juice to 1/2 cup of syrup and simmer for about 40 minutes. Strain and cool.

Spice syrup: Stick cinnamon (crushed) simmered with a drop of red food coloring gives you a delightful cinnamon syrup. Other sweet spices such as nutmeg, clove, or allspice will also yield interesting flavors.

Chocolate syrup: Add cocoa and vanilla to taste. Try this version with some added cinnamon for a Mexican chocolate version.

I created this syrup in the ginger version for use in a Ginger-Lime Spritzer recipe. Since then I've experimented with it in several different flavors. 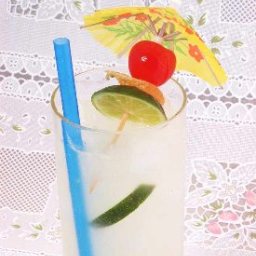 Fran76310
I made this and added lavender to use in my Lady Grey tea. With a little sugar free vanilla creamer, it is awesome. Thank you
4y
Reply
Reply

Punawild
I added the cocoa & peppermint extract to it to use in my coffee. Tastes pretty good on it's own. Gonna try it out today and hope it's like a skinny peppermint mocha. :)
9y
Reply
Reply

ReneeM
The funny thing, of course, is that this simple syrup is thinner, less syruppy than a simple syrup made with sugar. Which makes perfect sense, since ther is less sugar-like substance in it. Sucralose is much sweeter than sugar. To make 1 cup of sucralose have the same sweetening power as one cup of sugar, they somehow puff it up like ground-up styrofoam peanuts. If you cook it down until it *looks* like syrup, it will be very, very sweet. Yes, I did try this. For making home-made drinks, this isn't a problem.
13y
Reply
Reply

promfh
Updating picture [I made edits to this recipe.]
14y
Reply
Reply

promfh
I created this syrup in the ginger version for use in a Ginger-Lime Spritzer recipe. Since then I've experimented with it in several different flavors. [I posted this recipe.]
14y
Reply
Reply