Cut the butter into 1/2-inch cubes. Dump the flour, sugar, and salt into the bowl of a stand mixer fitted with the paddle attachment (or in a large bowl, if mixing the dough by hand). Mix for a second or two to blend the dry ingredients. Add the butter and then, running the mixer on low (or by hand with two knives or a pastry cutter), work the mixture until it's crumbly and the largest pieces of butter are no bigger than a pea (about 1/4 inch).

As the mixer turns on low sprinkle the cold water evenly over the flour and butter. Work the dough until it just pulls together as a shaggy mass.

Using a pot lid or a circle of cardboard as a template, trim the dough to form a 12-inch round (this should give you a 11/2-inch margin all around your 9-inch pie pan). Fold the dough in half, slide the outspread fingers of both hands under the dough, and gently lift it and transfer it to the pie pan. Unfold and ease the dough round into the bottom of the pie pan without stretching it.

Roll out the other dough ball and cut a second 12-inch round to be used as the top crust. 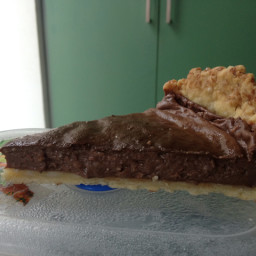 Jensbaking
I did everything it said to do and it was way too sloppy I had to tweak it to make it work.
10y
Reply
Reply