Savory turnovers filled with egg, tomato, and spices. Perfect for lunches and/or snacks.

Prepare dough and set it to rise.

Make filling: heat oil in a frying pan and saut onions, garlic, and cilantro over medium heat for 5 minutes. Stir in tomatoes and continue to saut for another 8 - 10 minutes; then stir in remaining ingredients except dough and extra olive oil. Stir fry until eggs begin to set; then remove from heat and allow to cool. Divide into 16 parts.

When dough has doubled in bulk, form into 16 balls and place on a floured tray. Cover with a damp cloth and set in warm place for 30 - 60 minutes until balls have doubled in size.

Roll balls into 5 to 6 inch rounds on a lightly floured surface; then place a portion of filling in the middle of each round. Fold dough to enclose filling in one of two ways: fold in half to create a half-moon shape or lift sides to meet in the middle, dividing the round into thirds and creating a triangle. In either case, fold and pinch edges of dough firmly. Continue until all balls are folded.

Place on greased baking trays; then bake in an oven preheated to 400F for 20 minutes or until pies turn golden brown. Remove from oven; then brush with olive oil and serve warm.

Note - if using green olives with pimentos, include pimento. Suggest pouring into a 9x13 cake tin to cool faster. Also, it is easier to cut the mixture into 16 equal parts in such a pan. Delicious served with yogurt sauce.

Each serving (app 3/4 cup) of filling contains an estimated:

With crust and filling each pie contains an estimated:

Nearly every culture has their own version of a savory pie. This one is from Syria and Lebanon. Served along with Falafel and a yogurt-garlic sauce they made a nice vegetarian dinner. 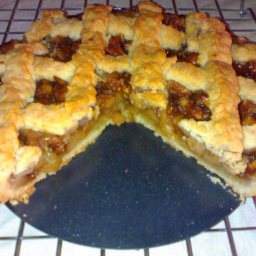 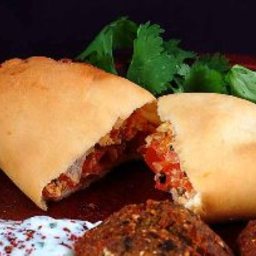 Hhhh92
Very tasty. I'll just have to work on the appearance of mine.
9y
Reply
Reply

promfh
Nearly every culture has their own version of a savory pie. This one is from Syria and Lebanon. Served along with Falafel and a yogurt-garlic sauce they made a nice vegetarian dinner. [I posted this recipe.]
15y
Reply
Reply