Try this Tabbouleh recipe, or contribute your own.

Soak bulgar. I only use about half of it. Tabbouleh should be mostly parsley, not bulgar. But everyone has their own preference, so use as much as you like.

Combine bulgar, chopped green onion, cucumber, and tomato. With a paper towel, try to squeeze out as much water as you can.

Dry the parsley and mint leaves on a paper towel to get off as much moisture as possible.

Small chop the parsley and mint.

Taste and add more salt, pepper, or spice to your liking.

Does not last long in fridge so try to only make as much as you are going to eat. 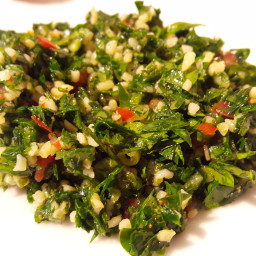