Makes 7-8 dozen. Making tamales is more of a project than a recipe. I will add detail but coming over to make them together is a plus.

Husks:Cover the corn husks with boiling water and soak 2 hours until softened. Unfold them and rinse them clean. Keep covered in water.

Peppers: Soak the dried peppers in boiling water for 30 minutes. remove seeds and veins, place in a blender with 1/2 cup of soaking water and blend until smooth. FYI-This stains anything it gets on.

Meat: In a large stock pot combine pork and water to cover, add 1 teaspoon salt, 1 sliced onion, 2 cloves garlic and ring to a boil. Lowe the heat and simmer 2 hours until tender. You can also put this on low in a large crock-pot at bedtime and it will be ready in the morning. Drain the broth and reserve to make masa. Shred all of the meat.

Masa Dough: In a large bowl beat shortening until fluffy, blend in masa and salt alternately with broth, mix well after each addition until dough has the consistency of thick cake batter.

Assembly: Spread husk with 1 tablespoon of masa down the center of the husk forming a rectangle that is flush with one side of the husk, spoon 1 tablespoon meat filling in center of masa and fold husk over filling so masa edges meet, wrapping plain part of husk around outside of tamale, fold bottom end of husk over tamale then fold in the tip.

Steam: Stack tamales in steamer, arranged loosely, steam for 45 min or until masa is firm and does not stick to husk. 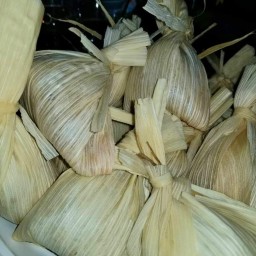