This makes a lot, but it freezes well and it's even better the next day.

Boil the chicken breasts in a large pot, reserving the water. While the chicken is boiling, melt the butter in a large, deep skillet and saute the onion and pepper until translucent. Add the soup, tomatoes, tomato sauce, and sliced Velveeta cheese to the onion and peppers and heat and stir until everything is warm and then set the mixture aside. When the chicken is done, remove to a plate to cool and bring the water to a boil. Break the spaghetti into 3 or 4 inch pieces and cook according to package directions. While the spaghetti is cooking, cut the chicken into bite sized pieces and add to the soup and cheese mixture in the skillet, stirring to mix well. Strain the spaghetti and rinse it with cool water and then add it to the chicken mixture, stirring to mix well. Turn all into a large baking dish, cover with foil and bake at 300 degrees for one hour. This is a heavy dish, so a light side dish such as a vegetable or salad would be good with this, but really it''s a meal by itself. 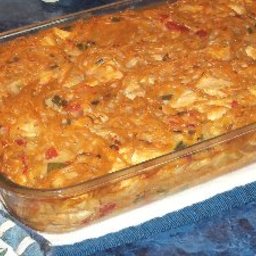 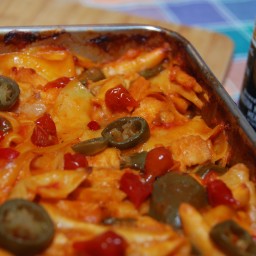 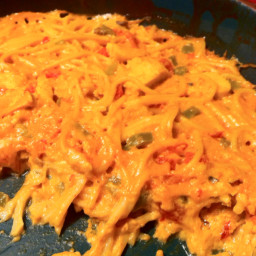 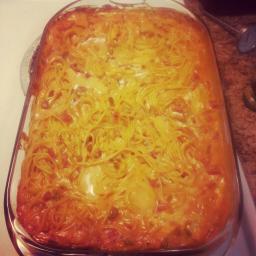 baked for 53 minutes, too hungry to wait the whole hour. It was good! 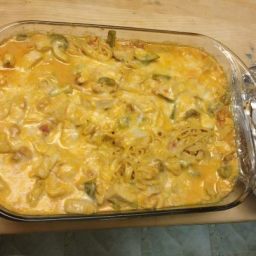 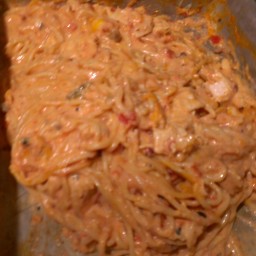 myrandaberlangab0d5
Okay, I need help.. my instructor really wants to try this recipe- the tex-mex chicken spaghetti, but doesn't eat poultry/meat. She was wondering what could be substituted for the chicken? And my family loves this dish, especially my dads friends!
6y
Reply
Reply

DoubleChin
Made everything but the spaghetti. Divided it and froze it. Put it on low in the crockpot and last minute we decided to eat it over tortilla chips, like chicken nachos. Next time will use hotter spicier Rotel. Looking forward to the second half in the freezer. Made a quick and easy dinner.
6y
Reply
Reply

Skyma
My family loves this. I usually make at least a double batch because it freezes so well!
6y
Reply
Reply

KGarrett28
This recipe was a big hit. I found it last year and make it everytime I have a huge gathering because it makes alot of food. I also tweek the recipe every time. I sometimes use angel hair spaghetti and instead of cheese slices I use the 16 oz block of velveeta and change those up from time to time. I also shred my chicken instead of cutting it up. Makes for easier pick up with my fork haha..but myself and family absolutely love this dish! !
6y
Reply
Reply

gothdragon
What a great change from regular pasta and sauce! I was actually surprised that it was THAT GOOD!!! Thanks for sharing!
7y
Reply
Reply

Memphius
I used ground chicken and added a few veggies. Like the author said, it is a heavy meal so serve with light side. Takes a lot of time and work, but overall very easy and very good. Family loved it!
7y
Reply
Reply

simplykendrajane
This dish is great! It was a little cumbersome to make just because it is a LOT of food. I followed some of the suggestions and used rotel and added sautéed mushrooms to mix. We also used fettichini instead of spaghetti, loved it!
7y
Reply
Reply