Try this Texas Armadillo Eggs recipe, or contribute your own.

The peppers can be fresh or canned, just be sure you drain well if canned. You can also use the round mild cherry peppers instead. Slice the peppers in half lengthwise down one side only and scrape out the seeds. If you accidentally cut all the way through, just try to keep the two halves together. Mix Bisquick, sausage and cheddar in a large bowl. (Use your hands, and work those muscles!) Get your assembly line ready: the peppers, the shredded jack cheese,= the sausage mixture, the beaten egg in a shallow bowl, the Shake N Bake in a shallow bowl, and a baking rack on a cookie sheet, both coated with cooking spray. Stuff each pepper with shredded jack, then stick the halves back together, if separated. Grab a handful of the sausage goo and wrap around the pepper in the shape of an elongated egg. Dip in beaten egg= and roll in Shake N Bake to coat evenly. Place on baking rack. When the peppers are all ready, bake at 350 for 25 minutes or till crisp.= NOTES: You can put the peppers straight on the baking sheet instead of on a rack, but they wind up flat on one side. Hey, they still taste just as good, though. Also, dont be stingy with the sausage mixture. Be sure you cover the entire pepper, or cheese could explode out the side while baking. And, a final thought: Ive heard it said that you can stuff the peppers with cream cheese instead of shredded jack. I tried that ONCE, and all I can say is that it takes more manual dexterity and WAY more patience than I have. And I really didnt think the results were worth it. But whatever way you decide to go, good luck. (I tried cream cheese in both fresh and canned peppers and had good results ~- in fact the cream cheese didnt melt and run out like the jack cheese did. Which reminds me -- after about 10 minutes in the oven the cheese begins to melt and run. When that happens remove the= rack from the oven and turn the "leakers" up so that the cheese doesnt all run out, then return the rack to the oven for the duration of the cooking time. -- -- Bill.) Compuserves Cooking Forum, 1997 Superbowl Posted to bbq-digest by johncartlidge@lucent.com on Mar 24, 1998 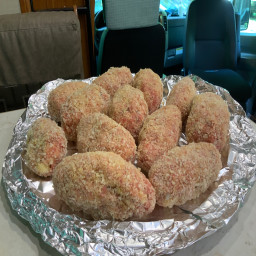