Try this Texas-Style Chicken Fried Steak with Cream Gravy recipe, or contribute your own.

Lightly beat egg and milk and set aside. Combine flour and spices, mix well, and turn out onto a flat-surfaced dish or tray. Dip each cutlet into the milk/egg mixture, then dredge each in the flour mixture, then dip back into the milk/egg mixture. Heat cooking oil in a large cast-iron or other heavy skillet over medium-high heat for a few minutes. Check it with a drop of the egg/milk mixture; if it pops and sizzles, its ready. With a long-handled fork, carefully place each cutlet into the hot oil. Protect yourself (and your kitchen) from the popping grease that results. Allow cutlets to fry for 3 or 4 minutes, then turn with your long-handled fork. Cook another 3 or 4 minutes, depending upon the size of the cutlets. Remove cutlets from oil and allow to drain on paper towels. Cream Gravy: After cutlets are removed from pan, pour off all but about 3 Tablespoons of the oil, keeping as many as possible of the browned bits in the pan. Heat the oil over medium heat until hot. Sprinkle 1/2 cup flour (use the left-over flour from the chicken fried steak recipe -- waste not ~- want not) in the hot oil. Stir with a wooden spoon, quickly, to brown the flour. Slowly add 3/4 cup milk and 3/4 cup water, mixed together, stirring constantly with the wooden spoon and mashing out any lumps. Lower heat, and gravy will begin to thicken. Continue cooking and stirring a few minutes until gravy reaches desired thickness. [Note to persons new to Cream Gravy: Gravy-making is an inexact science. Cream gravy is supposed to be thick, but if you think its too thick, add more liquid until you like it.] Check seasonings and add more salt and pepper according to your taste. Notes: It would be hard to get much more Texan than Chicken Fried Steak. Quality of the beef really counts in this dish. This recipe calls for cube steaks, but good round steak that you have asked the butcher to run through the tenderizer or that you have tenderized yourself with a mallet (no big deal and can be a real stress reliever) can be even better. Posted to recipelu-digest by Perry Greene ~~ltpalgreen~~at;hiwaay.net> on Feb 10, 1998 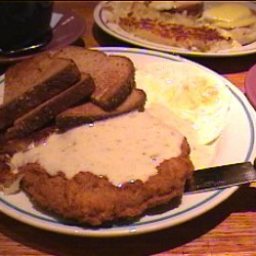 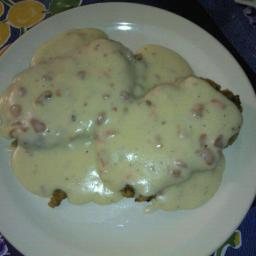 I added bacos and made a bigger batch of gravy :)

NormaMegee
My husband LOVED IT!!! Had cheddar biscuits and sunny side up eggs with it, and he dumped the country gravy over everything & ate to his heart's content :) I KNOW he liked it when he packed up the leftovers right away for his lunch tomorrow! It's a winner & will be in the rotation from now on.
6y
Reply
Reply

melcoop1369
We loved it! Have made it several times.
6y
Reply
Reply

Jacquikim15n
My husband loves this, now as a English Woman I have mastered this for him.
8y
Reply
Reply

cmpdcase
Added some powder mix for more flavor to the gravy but the meat was good. Used leftover gravy to make potpie the next day, yum
8y
Reply
Reply

shanban31207
Soak in the gravy for a bit b4 serving...hubby says it was delicious!
9y
Reply
Reply

Jpolendo13
Was fast and easy. Would recommend to everybody.
10y
Reply
Reply

daylightsun
[I made edits to this recipe.]
14y
Reply
Reply