Thai flavors make this thinly sliced steak kick a bit, but don't sweat it. You control the heat.

Mix the first seven ingredients for a marinade. Marinade the steak for 4-6 hours in a zip lock bag.

Remove the steak and place directly on a rocket hot grill. Rocket hot? I was running the Big Green Egg between 550f and 600f. You could also broil in the [cough cough] oven if you don''t have a grill at your disposal.

Be careful and use a mitt and long tongs when you first put the steak on, because the marinade will fall into the hot coals and flare up temporarily. But closing the lid once you get the steak on will quickly control the fire. That''s one of the nice things about a quality grill/smoker. You can control the air flow enough to get the heat up but control flame ups at the same time.

Grill the steak for 4-6 minutes a side until you reach the desired internal temp. On this cook, I went 4 minutes on each side, shut the vents and let it rest in the Egg for another 6 minutes. Next time I''d grill longer and maybe even skip the roast period. The outside of the steak didn''t have as much of a "char" as I like and the inside was more done than I like.

Slice thinly across the grain and serve.

For more heat, add more dried chilies to the marinade or some sriracha. As written, this was only moderately spicy to my family. If you like spicier foods, you'll want to bring more heat. 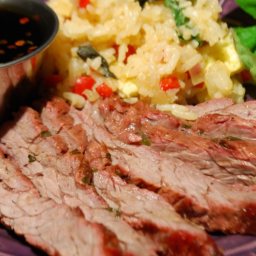 Skirt Steak with Beets and Greens

MoFest
Very easy, great tasting... I don't hav e an egg to throw it on, I just use a grill pan and it's still good. I cook it all the time.
7y
Reply
Reply

swibirun
For more heat, add more dried chilies to the marinade or some sriracha. As written, this was only moderately spicy to my family. If you like spicier foods, you'll want to bring more heat. [I posted this recipe.]
10y
Reply
Reply