This is our family twist on oyster dressing. We used ground beef in our recipe for extra flavor and body. I usually have to make more than my family can eat becase our Louisiana neighbors in our neighborhood have a standing order for some of this dressing every Thanksgiving.

In a very large cast iron Dutch oven or a very heavy, large pot, sweat the onion, celery, bell pepper, and add last the garlic, parsley and green pepper until the onions until the onions are soft and transparent and the veggies are almost dry. Simultaneously, brown the ground meat in a separate frying pan, adding a little salt and pepper until browned thoroughly. Drain the and dispose of the fat.

Drain the oysters and reserve the liquid for later. Once the veggies are ready add the ground meat, and the chopped oysters, and cook over medium stirring constantly to blend ingredients. Add seasoning.

Break up the stale French bread and soak in the oyster liquid. Wring out each piece of bread or cubes until almost dry and slowly add the to the meat, oysters and veggies, until incorporated. I usually add a fist full at a time and stir until integrated. Continue this until all of the bread is completely integrated into the mixture and cook until the mixture is very sticky and pulls away from the sides of the pot almost like a ball of dough. This can take some time but the aroma is outstanding. Taste for seasoning. I don’t season too much, because I like the natural flavors to come through. 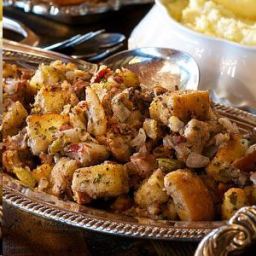 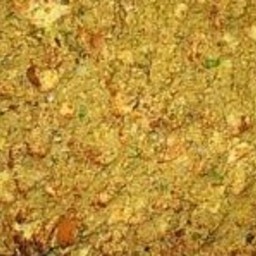 katnalberto
Excellent recipe! I took a few shortcuts like buying pre chopped veggies and using breadcrumbs instead of the loaf of French bread, otherwise I made it exactly as it says. Everyone loved it.
9y
Reply
Reply

katycajun
When chopping the oysters, pay attention and feel each oyster for shell pieces. There is usually a little piece of shell that is still attached to the oyster. Make sure all these pieces or removed. [I posted this recipe.]
13y
1 reply