First, credit for the source of the recipe goes to http://101cookbooks.com/ We modified it a bit as we went along, but the concept and basics are Heidi's -- and WHAT a concept. It's the best lasagna we've ever had.

There are five steps to making the dish... and it definitely takes lots of TIME. Open a bottle of wine and enjoy the process. It's second to none from start to finish.

The big difference between this lasagna and traditional is the SUPER thin layers of pasta. So thin that you have to make the pasta yourself or find flat sheets fresh pasta to run through your own pasta rollers.

Put all the ingredients in the bowl of a stand mixer or food processor. Mix until the dough starts to come together. Turn the dough out onto the counter, gather and gently pack it into a ball

shape, and knead a four or five times - until dough is smooth and all one texture. The dough should not stick to your hands, if it does - knead in a bit more flour. Cut in half, and flatten each piece of dough into a pancake shape roughly 1-inch high. I place each piece of dough in a plastic bag to keep moist until I am ready to use it.

When you're ready to roll (no pun intended), start on a thick setting and work your way down. We stopped at the next to thinnest setting on the Kitchen-Aid Mixer's Pasta Roller attachment. You could see shadows and light through the pasta by the time it was done.

Cut the strips to the right size and set aside until assembly time.

For the Bechamel Sauce:

In a medium saucepan, heat the butter over medium-low heat until melted. Add the flour and stir until smooth. Over medium heat, cook until the mixture turns a light, golden sandy color, about 6 to 7 minutes.

Meanwhile, heat the milk in a separate pan until just about to boil. Add the hot milk to the butter mixture 1 cup at a time, whisking continuously until very smooth. Bring to a boil. Cook 10 minutes, stirring constantly, then remove from heat. Season with salt and nutmeg, and set aside until ready to use.

For the Red Sauce:

Place the olive oil, salt, pepper flakes, and garlic in a pan. Dial the heat up and saute for a minute or two. Add the tomatoes and slowly bring to a simmer as well. Remove from heat, stir in the lemon zest and taste for seasoning. Add more salt if needed. Set aside.

We didn't pre-boil the pasta for a few reasons... first, it's so thin, it wouldn't have taken much more than a 30 second dip in the water before it was overcooked. second, it was so delicate it surely would have fallen apart and caused high blood pressure. Third, it really didn't need it. Since we added spinach and red bell peppers to the mix and spinach gives off loads of liquid when it's cooked, the extra liquid added to the recipe went into the pasta to "cook" it.

We let the assembled dish sit for nearly 40 minutes just to let it settle, let the pasta have a little time to absorb some of the liquid.

We cooked for 90 minutes at 350, but I suspect the shape and depth of the pan will dictate how long you cook it. Check the edges to make sure they don't dry out too much. If they start looking like they're drying too much, throw some foil over the top. 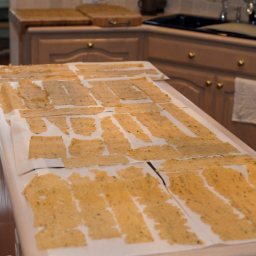 MrMikeMGM
Think THIN. Everything is thin. Key to making this one successfully and making it a "signature" dish is the thin pasta layers (combined with everything else thin). So if there's one key component, it would be rolling the pasta yourself. Doesn't have to be home made, but fresh pasta sheets that you roll yourself to the 1 or 2 setting on pasta rollers is REQUIRED to make this a super hit. [I posted this recipe.]
11y
Reply
Reply