2. Stir together milk and 2/3 cup water. Combine flour and next 2 ingredients; add to butter mixture alternately with milk mixture, beginning and ending with flour mixture. Beat at low speed just until blended after each addition. Stir in vanilla and almond extract.

3. Beat egg whites at high speed until stiff peaks form, and fold into batter. Spoon batter into two greased and floured 9 inch round cake pans. Bake cake for 30 minutes at 350, until a toothpick comes out clean. Allow to cool for 10 minutes and then remove from the pans and let them cool completely on a wire rack.

4. Prepare coffee syrup - mix everything in a small saucepan and stir until the sugar dissolves. Allow to cool while the cake is cooking.

5. Use long knife to slice the cakes into two layers. Put first layer on cake tray and poke it with a toothpick and spoon some of the coffee syrup over the cake.

6. Prepare the frosting. Beat the mascarpone cheese until soft. Whip in the sugar and the vanilla extract. Whip the whip cream and then mix it with the cheese. Mix the cheese mixture and the whip cream together with the mixture on low speed.

7. Put a thick layer of the cheese frosting on top of the first layer. Put the next layer on top and poke it with a toothpick and add the coffee syrup and a layer of frosting. Repeat this with the next two layers. then frost the entire cake. Garnish with raspberries if desired.

Mine is not as pretty as the Southern Living cake; however, it taste great! 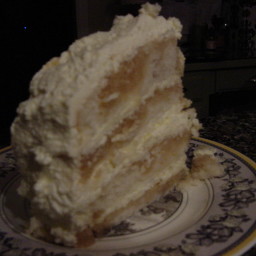