The intensely sharp, bitter Seville oranges conquer the sweetness of the sugar; giving that fresh, intensely orange fragrance and flavour that is unmatched in any preserve anywhere in the world.

I don't know if our American cousins have access to these oranges and, if not, I pity them. They are unparalleled for making a marmalade that simply zings on the tongue.

Begin by measuring 4 pints (2.25 litres) water into a preserving pan, then cut the lemon and oranges in half and squeeze the juice out of them. Add the juice to the water and place the pips and any bits of pith that cling to the squeezer on the square of muslin (laid over a dish or cereal bowl first). Now cut the orange peel into quarters with a sharp knife, and then cut each quarter into thinnish shreds. As you cut, add the shreds to the water and any pips or spare pith you come across should go on to the muslin. The pith contains a lot of pectin so don't discard any and don't worry about any pith and skin that clings to the shreds ? it all gets dissolved in the boiling.

Now tie the pips and pith up loosely in the muslin to form a little bag, and tie this on to the handle of the pan so that the bag is suspended in the water. Then bring the liquid up to simmering point and simmer gently, uncovered, for 2 hours or thereabouts until the peel is completely soft (test a piece carefully by pressing it between your finger and thumb). Meanwhile, chill the saucers in the freezer compartment of the fridge.

Next, remove the bag of pips and leave it to cool on a saucer. Then pour the sugar into the pan and stir it now and then over a low heat, until all the crystals have dissolved (check this carefully, it's important). Now increase the heat to very high and squeeze the bag of pips over the pan to extract all of the sticky, jelly-like substance that contains the pectin. As you squeeze you'll see it ooze out. You can do this by placing the bag between two saucers or using your hands. Then stir or whisk it into the rest.

As soon as the mixture reaches a really fast boil, start timing. Then after 15 minutes spoon a little of the marmalade on to one of the cold saucers from the fridge, and let it cool back in the fridge. You can tell ? when it has cooled ? if you have a 'set' by pushing the mixture with your little finger: if it has a really crinkly skin, it is set. If not, continue to boil the marmalade and give it the same test at about 10-minute intervals until it does set.

After that remove the pan from the heat (if there's a lot of scum, most of it can be dispersed by stirring in half a teaspoon of butter, and the rest can be spooned off). Leave the marmalade to settle for 20 minutes.

In the meantime, the jars should be washed, dried and heated in a moderate oven for 5 minutes. Pour the marmalade, with the aid of a funnel or a ladle, into the jars, cover with waxed discs and seal while still hot. Label when cold and store in a dry, cool, dark place. Then hurry up and make some toast to try some!

You will also need a preserving pan or a large, heavy-based saucepan; a 9 inch (23 cm) square of muslin (or gauze); some string; a funnel; and six 1 lb (350 ml capacity) jars, sterilised. 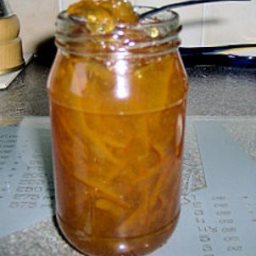 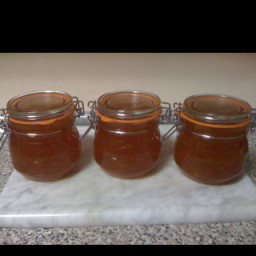 Tried this recipe and a great hit...already onto my second lot of oranges ... Thank you ! :))

keithharvey14
First time with this recipe and it's spot on !
8y
Reply
Reply

Keeno
Just made this. Absolutely fantastic not sure the 12lbs I have made will last the year :)
9y
Reply
Reply

danpa
You will also need a preserving pan or a large, heavy-based saucepan; a 9 inch (23 cm) square of muslin (or gauze); some string; a funnel; and six 1 lb (350 ml capacity) jars, sterilised. [I posted this recipe.]
12y
Reply
Reply