Making tamales is not difficult, but it is a very time consuming process. It can take a whole day to prepare a large batch of tamales. To save time you can cook the meat the day before, after shred the meat refrigerate in an air tight container for up to 3 days. Strain and refrigerate all of the broth also. I have also used prepared Masa from my local ethnic Mexican supper market.

NOTE: To save time I used a slow cooker in lieu of Dutch oven. I put the meat in the slow cooker before bed time; it cooks all night just fall all apart and so tender.

1. In a 5 qtr. Dutch oven, add water (or chicken, beef, vegetable stock/broth) to cover meat completely add onion, garlic, salt bring to a boil. Lower heat covered and simmer for about 2 1/2 hours or until meat is very tender and falls a parts.

1 Place meat into a slow cooker add liquid to cover meat completely add onion, garlic and salt. Set the cooker to low and cook until the meat is very tender 8 to 10 hours.

2. Remove meat from broth and allow meat to cool. Shred the meat using 2 forks, discarding fat. You can now refrigerate in an air tight container up to 3 days.

3. Strain and reserve all of the broth, onion, garlic cloves from tamale meat. Cooling the broth will allow you to easily remove the fat if you desire to do so, broth will be used in making the masa and red chili sauce, see "Traditional Tamales Red Chili Sauce for Pork or Beef (RAR)" recipe.

1. To make Masa beat lard on medium speed in a large bowl for 1 minute.

2. In a separate bowl, stir together masa harina, baking powder and 2 teaspoons salt.

3. Alternately add Masa (Harina) mixture and broth to lard, beating well after each addition. Add just enough broth to make a thick, creamy paste". When the dough has reached the light and fluffy stage.

4. Mix in 1/2 cup at a time of the cooled red Chile sauce from "Traditional Tamales Red Chili Sauce for Pork or Beef (RAR)" recipe, in to masa. Ensure that sauce is mix evenly throughout the dough.

1. Mix in 1/2 cup at a time of the cooled red Chile sauce from "Richard's Red Chili Sauce for Tamales (RAR)" recipe, in to masa. Ensure that sauce is mix evenly throughout the dough.

1. In the meantime, soak corn husks in warm water for at least 20 to 30 minutes; rinse to remove any corn silk and drain well.

2. To assemble tamale spread the dough out over the corn husks to 1/4 to 1/2 inch thickness. Each husk should be 8 inches long and 6 inches wide at the top. If husks are small, overlap 2 small ones to form one. If it is large, tear a strip from the side.

3. Place about 1 tablespoon meat and sauce mixture in the middle of the Masa and one or two black pitted olives, (optional). You may want to add pitted black olives in the tamales to give it that familiar Mexican Cuisine taste.

4. Fold in sides of husk and fold up the bottom.

5. Add water to steamer pot just below the basket.

6. Place the tamales in the basket so steam can cook tamale evenly with open side down.

8. Cover and steam about 40 to 60 minutes, or until the dough is firm. Remove tamales from steamer; let stand 5 minutes. Server.

9. To freeze these for future meals, leave them in the husks and place them in freezer bags. To reheat, for one or two wrap in paper towel and reheat in the microwave for 2 minutes or just until hot, or re-steam. 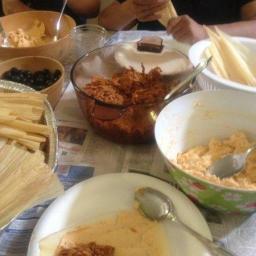 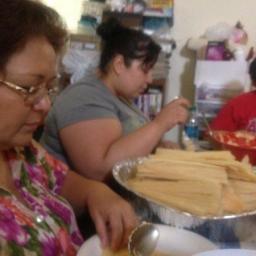 Getting the family to help 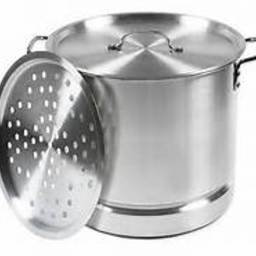