Try this Turkey Bacon recipe, or contribute your own.

First thaw out the bacon from freezer over night by placing it in the refrigerator the night before.

Add bacon to a low heated skillet. Place enough bacon in the pan to fill it up, but not so much so that it overlaps. If it overlaps there will be sections of the bacon that isn't cooked. And if there is too much space in the pan, not enough bacon grease will be released into the pan and the bacon can burn.

Cook on medium heat to your desired crispness, turning frequently.

Once you have cooked both sides, take the bacon out of the pan. Serve immediately, or place on a plate with paper towels to collect the excess grease. I used to drain excess oil on paper towel until I realized the benefit of its saturated fat.

Tips: to reduce spatter when frying bacon, fit a wire-mesh splatter screen over the skillet.

To keep bacon slices straight and reduce shrinkage, weight them down with an iron bacon press during cooking. 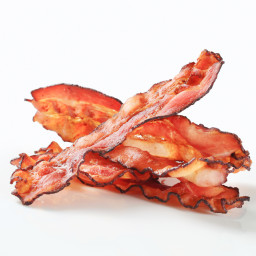