Here is how to make a super flavorful Twice Baked Potatoes recipe.

The potatoes are baked in the oven, scooped out and mixed with some

fantastic, flavorful ingredients, and then returned to their shells and

Spray the potatoes with cooking oil, and then grind some sea salt on

them. Place them in an oven-proof dish and bake at 400 degrees for 1 hour.

While the potatoes are baking, combine 1/2 cup shredded Cheddar cheese, 1/2 cup sour cream, 1/2 stick butter, 1/4 cup chopped green onions, 1 tablespoon chopped parsley, 1/2 teaspoon salt, and a dash of black pepper. Cover this mixture with plastic wrap, and refrigerate it while your potatoes cook. When your potatoes are done, split each of them into two equal halves with a knife. Since they will be hot, hold them with a potholder while you scoop out the potato meat. Place the potato meat in a dish, and reserve the potato shells. (It is important that this is done while the potatoes are hot.) Mix the potato meat with the mixture that you have previously made. Now blend in the crisp, crumbled bacon. Spoon this mixture evenly into the four empty potato shells. Sprinkle the top of each potato half with Cheddar cheese, to taste. Finally, sprinkle the potatoes with paprika, to taste. You may freeze the potato halves at this point, but be sure to thaw them before you bake them. When ready to bake, if the potatoes are refrigerated or cool, let them come to room temperature. Then bake them in an oven-proof dish for 20 minutes in an oven that has been preheated to 400 degrees. If they are cool when you put them in the oven, it will take a little longer. This is an elegant and great-tasting addition to any meal! Particularly a meal for company!!! 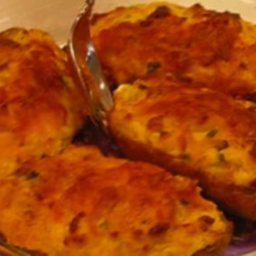 yanahs70
I made these when I cooked dinner for my roommate and I wanted to try something new. They were delicious I will make these again.
10y
Reply
Reply