I first watched Robert Rainford grill these on the Food Network. I tried them once, my family loved them, and they were an instant hit with everyone who I've made them for since. The hint of Dijon mustard puts and interesting twist on them. Very yummy.

Potatoes: wash and cut in half lengthwise. Rub with oil and season with salt and pepper.

Prep grill to grill direct over low heat. Oil grill and place the potatoes with the fleshy side down. Close the grill lid and cook for 30 minutes turning once until soft and flesh side is caramelized. Remove from grill and cool until you can handle your "hot potatoes."

Scoop out the insides (I use a mellon-baller) leaving at least a quarter-inch boarder all around the potato so that it won't fall apart when you return it to the grill.

Put the potato insides in a bowl and add whip cream and half of the cheese. Add the bacon, Dijon, salt and pepper. Mix the stuffing until well combined, but still chunky. You can also add the chives with everything else in the beginning, but I always wait until after the other ingredients are mixed together well first and then "gently fold" the chives into the stuffing so that they don't get as "beat up" while mixing. It improves the presentation considerably.

Fill the potatoes with filling and top with what's left of your cheese.

Increase grill temp to medium-low and place the potatoes back in the grill, skin side down.

Cook until warmed through and cheese has caramelized. Around 7-10 minutes.

Remove and serve with sour cream if that's your sorta thing. Enjoy! 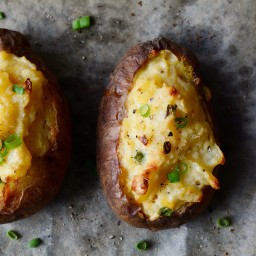 ewtotel
Try changing some stuffing ingredients. I like swapping the Dijon for some horseradish, but I always come back to Rainford''s original recipe. [I posted this recipe.]
11y
Reply
Reply