A traditional, comforting dish where simplicity is the key to success - one for all the family

For the pastry, beat the butter and sugar in a large bowl until just mixed. Break in a whole egg and a yolk (keep the white for glazing later). Beat together for just under 1 min - it will look a bit like scrambled egg. Now work in the flour with a wooden spoon, a third at a time, until it's beginning to clump up, then finish gathering it together with your hands. Gently work the dough into a ball, wrap in cling film, and chill for 45 mins. Now mix the 140g/5oz sugar, the cinnamon and flour for the filling in a bowl that is large enough to take the apples later.

After the pastry has chilled, heat the oven to 190C/fan 170C/gas 5. Lightly beat the egg white with a fork. Cut off a third of the pastry and keep it wrapped while you roll out the rest, and use this to line a pie tin - 20-22cm round and 4cm deep - leaving a slight overhang. Roll the remaining third to a circle about 28cm in diameter. Pat the apples dry with kitchen paper, and tip them into the bowl with the cinnamon-sugar mix. Give a quick mix with your hands and immediately pile high into the pastry-lined tin.

Brush a little water around the pastry rim and lay the pastry lid over the apples pressing the edges together to seal. Trim the edge with a sharp knife and make 5 little slashes on top of the lid for the steam to escape. (Can be frozen at this stage.) Brush it all with the egg white and sprinkle with caster sugar. Bake for 40-45 mins, until golden, then remove and let it sit for 5-10 mins. Sprinkle with more sugar and serve while still warm from the oven with softly whipped cream. 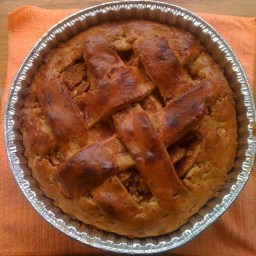 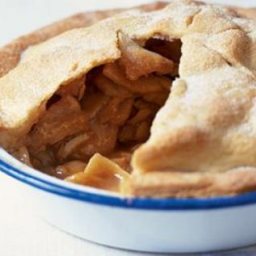 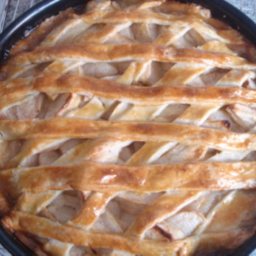 MummaCaragh
My husband & I made this for Sunday dinner, and it was wonderful. We both highly recommend this recipe. Never made pastry this way before but it really worked well.
10y
Reply
Reply

Lana_In_Austin
Very nice recipe! We liked it a lot! I've played a little bit with filling, having added some lime-peel (from one lime), lime juice (half of lime) and raisin. As well, I have replaced flour with oat-flakes and warmed up the filling in a deep pot before filling the pie. It makes a pie very juicy. Oh, I used whole grain flour and it worked very well, too.
11y
Reply
Reply

danpa
Please note that if you click on the "Tools" button in BigOven, you'll be offered a converter. You can use this to find direct equivalent temperatures between Celcius and Fahrenheit. Europe = Celcius : USA = Fahrenheit
12y
Reply
Reply

sweetsmile7794
probably because the whole world uses degrees in celcius except u guys..
12y
Reply
Reply

margann
I am not very impresed with the oven tempreture 190c for 40 to 45 minutes , why not try giving us the American oven tempreture like 350 degree temp. etc. etc. I do realize that this is an Enlish recipe, but we still would like to try it here in USA and Canada also. I am going to try it and if it does not cook I will have to raise the temp. margann
12y
Reply
Reply