Preheat oven to 350F. Grease three 9-inch round cake pans, and line the bottoms with parchment paper for the cake layers.

In a large bowl, whisk the flour, baking powder, baking soda and salt.

In another bowl, whisk the boiling water and cocoa powder until smooth.

Beat butter and sugar together on medium speed in a bowl of a standing mixer until light and fluffy. Beat in eggs, one at a time. Beat in buttermilk and vanilla extract.

Divide the batter and pour into the prepared pans, smoothing the surface with a spatula. Bake 20 to 25 minutes or until a toothpick inserted into the cake comes out clean.

Place the cakes (in the pans) on a wire rack to cool. Then invert the cakes onto a greased rack. Cool completely before frosting.

To prepare the buttercream, put egg whites and sugar in a mixing bowl over a pot of simmering water. Use an electric hand mixer to beat constantly until the sugar has completely dissolved and the egg whites are hot. Remove from heat.

With whisk attachment, continue whipping the mixture in a standing mixer until thick, glossy, and cool.

Switch over to paddle attachment. While mixing on medium speed, continuously add softened butter in chunks until incorporated, and mix until it has reached a silky smooth texture. If curdles, keep mixing and it will come back to smooth.

To assemble the cake, place one cake layer on your serving plate and spread with 1/3 cup of the buttercream. Repeat this process until all cake layers are placed. Smear buttercream on top and sides of the cake. Top the cake with dark chocolate truffle*.

Cover and refrigerate the cake. Leave out in room temperature for at least an hour prior to serving.

* To prepare dark chocolate truffle, put the chopped chocolate into a medium sized heatproof bowl and set it aside. In a small saucepan heat the heavy cream over medium heat until it simmers. Pour the hot cream over the chocolate. Add the vanilla. Let the cream melt the chocolate for 5 minutes (without stirring) and then stir until silky smooth.

When ready to assemble, roll the truffles in the cocoa powder. Serve or keep in the fridge until ready to eat.

Prepare the chocolate truffle in advance for cake decoration or serve individually. 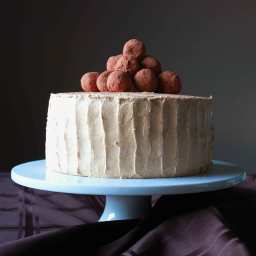