2. Put the icing sugar, plain flour and cornflour into the bowl of a food processor fitted with the double-bladed knife and give them a quick blitz (just to save you sieving) before adding the butter along with the vanilla seeds you've scraped out of a pod. (I find the easiest way to do this is by cutting the pod in half across, and then splitting each short half lengthwise and prising out the seeds with the point and edge of a sharp knife. Don't even think of throwing the deseeded bits of pod away: stash them in a jar of caster to use next time a recipe requires vanilla sugar.)

3. Process again until the soft mixture coheres and begins to form a ball, loosely clumping around the blade. Turn this out on to a Swiss roll tin and press to form an even (or as even as you can make it) layer, using fingers or the back of a spoon, or both. Be patient: I promise you it will fit smoothly.

4. Using the tip of a sharp knife cut the pressed-out shortbread into fingers. I make two incisions lengthways - ie to form three layers - and then make ten cuts down - so that you end up with eleven fingers per layer. Obviously, the aim should be to cut at regular intervals but don't start getting your ruler out. Just go by eye: uniformity is the province of the conveyer belt not of home cooking. Use the tines of a fork to make little holes in each marked-out biscuit: I press down about three times, diagonally, on each finger.

5. Now that you've pressed, incised, and punctured, slide the Swiss roll tin into the oven and bake for about 20-25 minutes, by which time the shortbread will be pale still, but not doughy. Expect a little goldenness around the edges, but shortbread should be not crisp but melting. Remove the tin from the oven and let cool for 10 minutes or so, before removing, with a palette knife and your fingers, to a wire rack. Sprinkle with sugar and leave them to cool completely before storing in a tin. 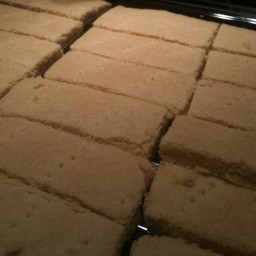 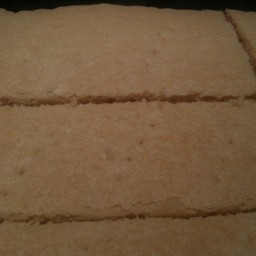 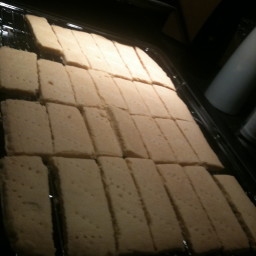