Here is a unexact recipe for a Vegetable Hamburger Stew I threw together for supper tonight that turned out very yummy.

My hamburger was pre-browned and re-frozen as I brown about 10 to 15 pounds at a time and freeze in small packages to make cooking quicker so this is how I threw together this yummy stew.

I filled up a large pot with water. Tossed in a packaged of pre-browned (also pre-seasoned) hamburger. Added the baby carrots because they would take the longest to cook.

While the hamburger and carrots boiled, I chopped a large onion and sauteed it in butter - added it to the hamburger.

Added tomato sauce and seasoning. Added pearl barely (pearl barely does not take as long to cook at pot barely). Let simmer until carrots were slightly tender and barely was cooked. Sampled and adjusted seasonings to taste. At this point the stew was basically done except for the frozen vegetables and minute rice. Had I used regular rice, I would have added it at the same time as the barely.

Frozen vegetables should ALWAYS go in last - RIGHT before serving as they only need a few minutes to basically warm up. If they are over-cooked they get mushy and don't taste good.

Corn first as it needs longest heating time. Then beans - peas last. This way, they stay nice and firm and keep a nice bright colour. 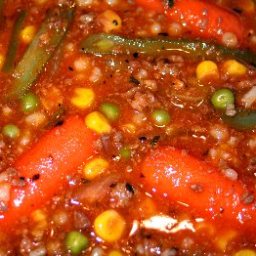 jessicakalbarczyk
This was awesome! We ate it over some garlic mashed red potatoes. I used canned corn and canned green beans and it came out just fine. My husband is a big fan too. GREAT for leftovers and healthy too!
10y
Reply
Reply