Try this Vegetarian Shepherd's Pie recipe, or contribute your own. 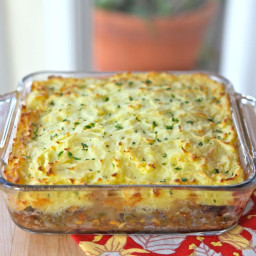 ees55
This is an awesome recipe! It's relatively healthy, full of flavor, and easy to customize based on what you have on hand. For the mashed potato portion, I like to bake russets then send the filling through a potato ricer before gently mixing in browned butter, room temp lowfat milk, black pepper, cayenne and freshly grated Parm. For the veggie mixture, I omit the garlic, swap in broccoli for some of the onion, celery, and corn, and use canned, drained chickpeas (no need to cook them before mixing with the veggies) instead of lentils. Sprinkle the mashed potato topping with more Parm and dot with butter before sending it into the oven for some bubbly, golden brown action.
2y
Reply
Reply