This is one of the best cakes I have ever made. I have always loved coconut cake, but covered in white chocolate with raspberry filling it is just 10 times better!

1. TO MAKE THE CAKE LAYERS

2. Position a rack in the middle of the oven and preheat to 350°F

3. Combine the flour, baking powder, and salt in a bowl, mixing well

4. Place the butter and sugar in the bowl of a heavy-duty mixer fitted with the paddle attachment and beat on medium speed for about 5 minutes, or until very soft and light. Beat in the vanilla.

5. Whisk together the egg whites and milk by hand in a medium mixing bowl until just combined.

7. Fold in flaked coconut, mixture will appear a bit lumpy, that is ok!

8. Pour into two greased and floured 9-in. round baking pans. Bake at 350° for 25-30 minutes or until a toothpick inserted near the center comes out clean. Cool for 10 minutes before removing from pans to wire racks to cool completely.

10. In a microwave, melt white chocolate and cream for 1 minute; stir. Microwave at additional 10- to 20-second intervals, stirring until smooth.Cool to room temperature.

12. Once cake layers are cooled, trim, then spread filling over bottom layer. Place the second layer on top and let rest while preparing frosting.

13. In a small bowl, beat butter until fluffy. Add confectioners’ sugar; beat until smooth. gradually beat in white chocolate mixture. Spread over top and sides of cake. If frosting is still too warm, let cool in the fridge.

14. Toast the remaining coconut and press over top and sides of cake, make sure you let the toasted coconut cool before trying to press into the chocolate or the heat will make the chocolate run.

15. Decorate with fresh raspberry and slice away! You will love this cake! 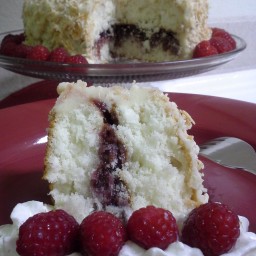 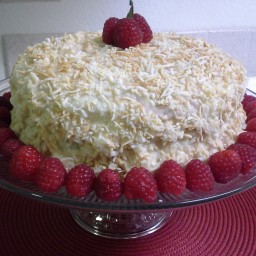 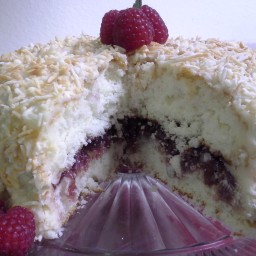 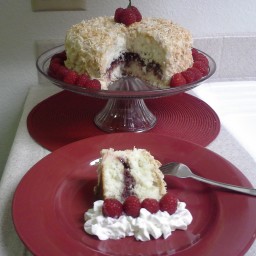 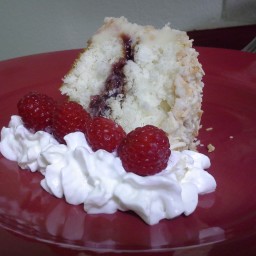 Aimy
I love coconut cake always. This cake is a bit different because coconut has been toasted. First I thought I would not like it. Instead, I love it. Raspberry with the toasted coconut are just great together. Really love it even when I am on a diet.
7y
Reply
Reply

thebipolarcook
This is a recipe I saw on a Taste of Home, but it used a boxed cake mix. While I sometimes use a box mix, i adapted this recipe a bit to use a cake layer mix that I use regularly when baking a white layer cake. This White Chocolate Coconut Raspberry Cake is simply amazing! If you like coconut and you like chocolate, you must try this cake. It is simply wonderful! The fresh raspberries are a must in my opinion, it adds so much to every sinful bite! I can not wait to make this cake again! (I made this cake for Christmas 2012)
7y
Reply
Reply