Try this Outback Steakhouse Alice Springs Chicken recipe, or contribute your own.

Use an electric mixer to combine the mustard, honey, 1 1/2 teaspoons oil and lemon juice in a small bowl. Whip the mixture for about 30 seconds. Pour about 2/3 of the marinade over the chicken breasts and marinate them, covered, in the refrigerator for about 2 hours. Chill the remaining marinade until later. After the chicken has marinated, preheat the oven to 375F and heat an ovenproof frying pan large enough to hold all four breasts and 1 tablespoon oil over medium heat. (If you dont have an ovenproof frying pan, transfer the chicken to a baking dish)

As the chicken is cooking, in a small frying pan saute the mushrooms in the butter. Brush each seared chicken breast with a little of the reserved honey mustard marinade (not the portion that the chicken soaked in) being sure to save a little extra that you can serve on the side later with the dish.

Season the chicken with salt, pepper and paprika. Stack two pieces of cooked bacon, crosswise on each chicken breast. Spoon the sauteed mushrooms onto the bacon, being sure to coat each breast evenly. Sprinkle 1/4 cup Monterey Jack cheese evenly onto each breast followed by 1/4 cup of Cheddar. Bake the pan of prepared chicken breasts for 7-10 minutes or until cheese is thoroughly melted and starting to bubble. Sprinkle each breast with 1/2 teaspoon parsley before serving. Put extra honey mustard marinade into a small bowl to serve on the side. 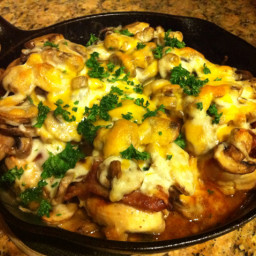 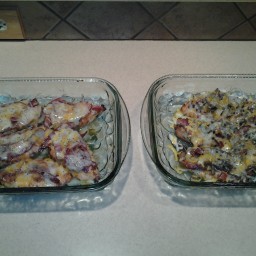 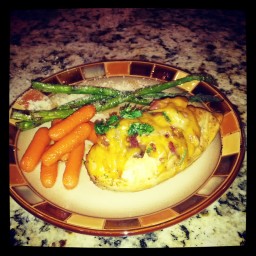 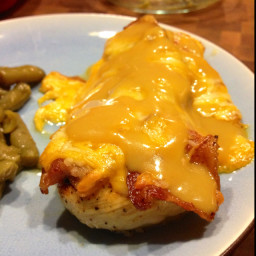 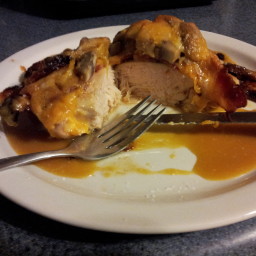 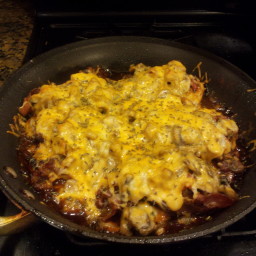 _Lenise_
This recipe was perfect! This is my favorite dish from Outback and I haven’t went since Covid-19. My dish tasted just like the real deal! I paired it with asparagus and a sweet potato. Sooooo good!!
2m
Reply
Reply

jdriemeyer
Full of great tastes. My family liked everything about it.
1y
Reply
Reply

megan71108
Absolutely amazing !!!! Made it with chicken thighs instead because we aren’t a fan of breasts but definitely will be making it again, and soon because there was no left overs!!
2y
Reply
Reply

Meeche33
One of our favorites. Will be making this often.
3y
Reply
Reply

fanc77
This a family favorite, I've made it countless times. Tastes just like the original from Outback.
4y
Reply
Reply

marladarla1
I've made this dish countless times and have had rave reviews..you can't go wrong on this one..love it!!
6y
Reply
Reply

hunnibun
Lovely flavours. I left the mushrooms out as I hate them but apart from that I didn't change a thing. So yummy
6y
Reply
Reply