I’ve read for years that when making minestrone or other Italian soups, you cannot go wrong with throwing in an old Parmesan rind for flavor. And I’ve done it here and there, but it’s never changed my life. Meanwhile, I spent a spectacular amount of time obsessing over a chicken broth-based at Maialino shortly after it opened, trying to figure out what they’d done to elevate the chicken stock to nothing short of what I imagine crack would be like? Okay, maybe I’m reaching a little. Nevertheless, I hadn’t put two and two together until just a couple days before this dinner party, when In Jennie’s Kitchen shared a recipe for parmesan brodo — a broth made almost entirely from parmesan rinds — and I could not get it out of my head. The result was the most luxurious, rich and loud broth I’ve ever made. It’s said you can use it for risotto or heartier soups, but I wouldn’t dare. It’s too amazing just puddled plain on a spoon. Instead, I tried to enlist its inherent amazing-ness to add life to more earnest ingredients — white beans, plus their bean cooking broth (more soup nirvana for you there, trust me), and ribbons of kale. We were having a good amount of pasta for dinner, so I wanted to lay off the noodles (although tortellini would be wonderful in a soup like this) but I did float a thin slice of toasted baguette on top, which we then drizzled with the olive oil I smuggled back from Rome some 84 degrees and 8 months ago, and yes, some grated Parmesan.

Make the broth: Bring all broth ingredients to a boil in a large pot, then reduce it to a simmer. Simmer for one hour. Pour broth through a strainer. Your yield should be approximately 4 1/2 cups. You can use this right away or cool it before storing it.

Turn the broth into soup: Prepare kale by removing tough stems and center rib (I often use kitchen shears for this), then cutting the leaves into thin ribbons. Add them to the broth, along with the beans. Add bean cooking liquid if you wish; this not only stretches the intense parmesan broth further but adds a gorgeous extra depth to the soup. Simmer ingredients together for 10 minutes, until kale leaves wilt and beans are warmed through.

To serve: Ladle a small amount of beans, kale and broth into a bowl. (It’s so rich, we like it in smaller portions.) Top with a slice of toasted baguette. Drizzle baguette and soup lightly with your favorite olive oil and grate some fresh parmesan cheese over. Eat immediately.

So many notes:
Not technically vegetarian: Strict vegetarians do not eat Parmesan as calf rennet is used in production.

Lady, where do you think I’m going to get a half-pound of Parmesan rinds? Don’t worry, I don’t think anyone goes through that much Parmesan, not even you. I probably wouldn’t even be writing this recipe up had I not made the discovery that you can buy Parmesan rinds-aplenty at a handful of stores. Both Whole Foods I’ve gone to in NYC stock them, thus I’m sure most locations do, as do other grocery stores and many cheese stops — essentially, if a place sells freshly-grated Parmesan, they have a supply of rinds somewhere. If they’re nice, they’ll give them to you for free. If they’re business-smart, they’ll charge you, but still significantly less than you’d pay for the cheese itself. However, in the future, please promise that you won’t throw away any Parmesan rinds (or pecorino Romano, or… actually, if you add cheese rinds to soups, I’d love to hear your favorites); you can even keep them in the freezer, as you would other good soup “bones,” until you need them.

Beans: I used cannelini beans for this the first time, but I spied some of Rancho Gordo’s Yellow-Eye beans in my cabinet (which are a great swap for white beans, wherever you use them) and had to use them instead, as it was just a day or two after New Years and I hadn’t gotten my black-eyed pea fix. The only downside of using a non-white bean such as this is that if you want to add the bean broth to your soup, it will change the color to something even less pretty.

How to cook dried beans: I promise, a separate post is coming on this. In the meanwhile, if you have time to soak your beans (cover them with way more water in a bigger bowl than you think you’ll need and leave them to soak for 8 hours or up to 24), do it, I find that it cuts stovetop time in half, or at least down by 1 hour. I dump it, soaking liquid and all, into a heavy pot, add more water (plus any aromatics you’d want, herbs, bay leaves, spice, onions, or garlic, but hold off on the salt for now) and bring the pot to a full boil. Boil it for one full minute, skimming any foam or, ahem, “scum” that floats, then reduce the heat to the lowest simmer possible, checking it from time to time and adding more liquid if needed. Your beans, depending on variety/age/if you soaked them, will take 1 to 3 hours to cook from here. My soaked-overnight white beans took just 1 hour. Once they are mostly softened, you can add salt to taste. Store them in their cooking liquid, which you should seriously consider adding to any/all soups as extra broth. Don’t dump all the flavor down the drain. I’ve also cooked beans many times, usually without bothering to soak, in a slow-cooker, for anywhere from 2 1/2 to 5 hours on HIGH (or longer on LOW). Yes, it takes longer, but the beauty of the slow-cooker is that it’s hands-off, while a stovetop needs to be somewhat monitored. 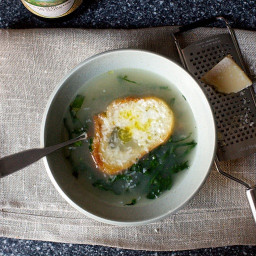