I often make an eggplant dip (similar to Baba Ganoush)... and this recipe is a bit similar. Instead of using just eggplants as the base, the Ajvar also includes grilled/roasted bell peppers and onion. It really is a great and different spread. It has such a beautiful bright color. Great to have on hand when you want a quick snack or appetizer. I chose to use it with bagel crostini.... Just for reference, you can easily double the recipe and freeze it. It freezes beautifully!

Peel the onion and cut in half. Place the eggplant ,peppers and onion on a hot grill until they are blackened. It is easier to peel the eggplant and bell peppers when their skin is blackened. You will need to turn them over so that all the sides get blackened. Take them off the grill and place them in a bowl and cover with plastic wrap. The steam that forms will help the skin come off the vegetables. Remove the skin from peppers and eggplant and cut them into pieces.

Do the same with the onion. Mince the garlic and the jalapeno. Place them in a pot on the stove on medium heat. Add oil and vinegar and seasoning. Mix.

Cook on low for at least one hour ...or longer. Cook and stir frequently so that it doesn't burn. When it is done, place the mixture in a blender and blend till smooth. Be careful...it is hot. If you want it more chunky don't blend it too long...use the pulse button.

You can return it to the pot for just a few more minutes. Place in jar/s. You can sterilize the jar/s and pour a little oil on top before sealing them. Serve with crostini, bread, meats, etc. 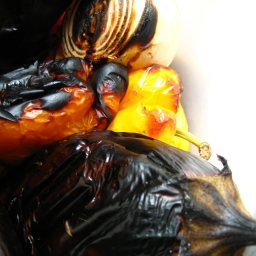 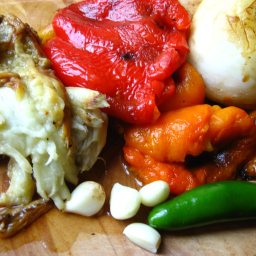 Grilled vegetables...ready to be chopped. 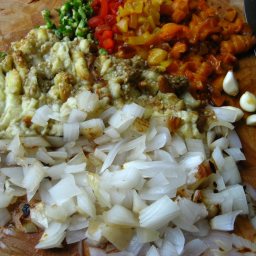 Chopped vegetables...ready to be placed in a pot and cooked. 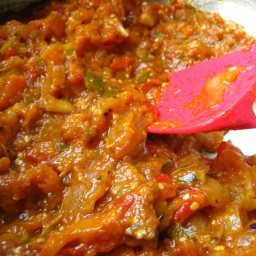 Cooked vegetables...ready to be blended. 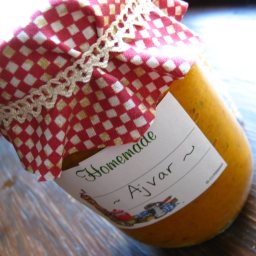 Ajvar...blended and placed in a jar. 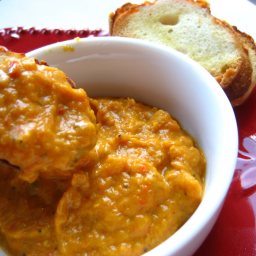 ellie36
You can use orange and yellow bell peppers...if you like. That is what I had on hand. I had to add some paprika to bring in a bit of the red color. [I posted this recipe.]
12y
Reply
Reply