A compromise between the recipe of my childhood and the gourmet recipes of today, with no mushrooms!

After slicing meat, sprinkle liberally with salt, pepper and paprika. Toss meat so all slices have been seasoned.

Cover the bottom of a smoking hot cast iron skillet with olive oil and add the meat (in batches) searing on both sides. When browned, remove each batch to a dutch oven.

When all meat has been browned and removed, add onions to skillet. Toss frequently until browned and softened, then add garlic and when garlic has taken on some color, dump contents over the meat in the dutch oven.

Add wine and cook until liquid has reduced visibly.

Add beef broth, cover and simmer 35 minutes (until meat can be pulled apart and is not chewy.)

In a large pot, boil a gallon of salted water.

Using a slotted spoon, scoop out solids and evacuate (still have that skillet handy?) Whisking often, cook the liquid for 15 minutes to reduce (now is a good time to add any more seasonings if it isn?t quite right, or to add more broth if you don?t think you have enough sauce.)

Whisk in sour cream and return meat to sauce to bring back to temperature.

Serve meat and sauce over noodles; garnish with parsley. 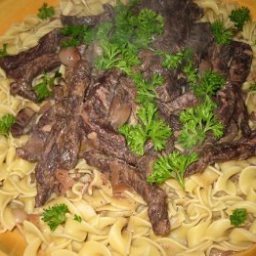