Taste good especially when it's warm...Try it you would definitely love it!

In a separate bowl, Stir together flour,baking powder,and baking soda, set aside.

3. After preparing cream cheese filling pour cream cheese mix in the baking pan that you prepared pour mix over wax paper and set aside.

4. In a separate bowl beat the egg yolks and vanilla with an electric mixer on high speed about 5 minutes or until thick and lemon colored. Then gradually add 1/3 cup sugar, beating on high speed until sugar is dissolved. Stir in the banana's and nuts.

5. Thoroughly wash the beater well. In a large mixing bowl beat the egg whites, on medium speed and gradually add 1/2 cup sugar until soft peaks form. (peak is ready when holding beater down and peak holds without falling).

6.Carefully fold in egg yolk mixture listed on line #4 that you had already prepared. (Do not beat with beater).

7. Than carefully sprinkle Cake ingredients that you had prepared in the first stage on line #1, add it into the bowl mixture fold gently until combined. Gently spoon batter over filling in pan. Carefully spread evenly over filling.

Allow cake to cool take out a piece of wax paper roll it out flat on a table or counter top, roll it out a little larger than your cake, flip cake carefully on to wax paper (Tip: May lay out wax paper on top of cake than use a cutting board or a large board lay it over the top of cake and wax paper hold it and flip it carefully,) peel off wax paper on top of cake, than slowly roll your cake. Starting from a short side, roll up the cake and filling until you rolled it completely, set it down on the seam side so it remains closed. Pour icing over cake you may also sprinkle more nuts on top of icing. 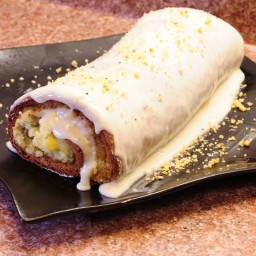 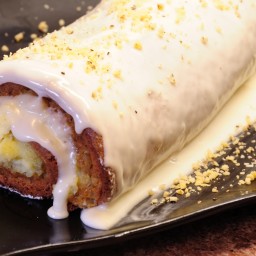 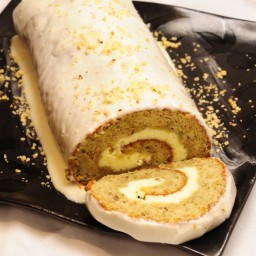 gloriaosmond
Loved the reciepe! As I love all!
5y
Reply
Reply