Heat the olive oil (or beef dripping or lard) in a big skillet over medium heat in and lightly brown the bacon. Remove from the pot and transfer to a big deep casserole (Dutch oven - highest and best use of cast iron le Creuset pot) with a tight fitting lid.

Dry the meat so it will brown well.   Brown the meat quickly in the rendered bacon fat. Once browned, place it in the casserole with the bacon.

Lower heat to medium-low, and brown the shallots. Transfer to the casserole with the meat. Add additional oil (or fat of choice) to the skillet if too dry and cook the rice over moderate heat for 2 to 3 minutes. Transfer to a separate bowl and set aside until later.

Add the wine and stir over medium heat to dissolve any food scrapings in the pan. Add to the casserole and add stock or bouillon almost to the height of the meat.  Stir in the pepper and herbs. Bring to a simmer over medium-low heat, cover tightly, and set in lower position of preheated oven for 1 hour.

Remove casserole from oven. Stir in the tomatoes, bring to a simmer, cover, and return to the oven for an additional hour of simmering. When the meat is almost fork tender, remove pot from oven.

Skim off any excess fat. Stir in the rice. Bring to a simmer over medium-low heat, cover, and set back in the oven for 20 minutes until the rice is cooked. Do not stir the rice. At the end of the time it should be tender and have absorbed almost all the liquid.  Just before serving, fold the cheese into the beef and rice.

Its Julia, whats the worst that could happen. 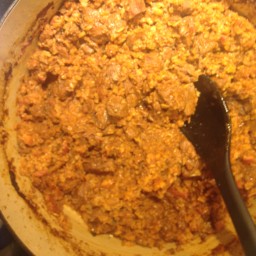 Just after adding the cheese.