Try this Burger King Whopper recipe, or contribute your own.

2) Toast both halves of the bun, face down, in hot skillet. Set aside.

Yield: 1 hamburger In 1954, in Miami, FL, James McLamore and David Edgerton built the first Burger King Restaurant. By 1991 more than 6,400 Burger King outlets could be found in fourty countries and all fifty states. That gives this burger giant more than $6 billion in sales each year, making it the 2nd largest fast-food chain. (McDonalds is the largest.) For many, the favorite item on the menu is a flame-broiled hamburger conceived by the partners on a business trip from Orlando to Miami in 1957. Dubbed the "Whopper," this sandwich is overwhelmingly popular; figures show that Burger King sells more that 540 million annually, or nearly 2 million a day. And with more that 1,023 different combinations of the eight-or-so ingredients, including a vegetarian version, you really can "have it your way." From "Top Secret Recipes" by Todd Wilbur 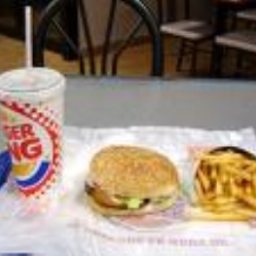 stevemur
[I made edits to this recipe.]
15y
Reply
Reply