Soup That Warms the Soul.

Caldo Gallego is a hearty and delicious soup that has some form of beans, greens, and pork as the base ingredients. There isn't one main recipe, because in Galicia, it is traditionally made with vegetables that are in season, beans that are on hand, and pork that is already in the kitchen. With the recipe below, I've included typical Galician ingredients with substitutions that can be made, if necessary.

Peel and dice onions and potatoes.

Put onions, beans (not the canned kind), ham, and stock (or water) in a large pot and bring to a boil.

Let simmer for 40 minutes, or until the beans are very tender.

FYI: In Galicia it is traditional to serve Caldo Gallego alongside a plate with the greens from the soup, a slice of Lacón (boiled meat from the front leg of a pig), and some hearty bread.

Salt and Pepper to taste

And if you want to try Caldo Gallego without having to make it yourself, scroll down to the "I Just Want to Eat" section to find out where you can buy it.

Lastly, in the May 3, 2011 post on the "Spain... On the Road Again" blog is a recipe for Caldo Gallego from the show, which features chef, restauranteur, author and Food Network star Mario Batali, Oscar-winning actress Gwyneth Paltrow, New York Times Columnist and author Mark Bittman, and Spanish television actress Claudia Bassols. 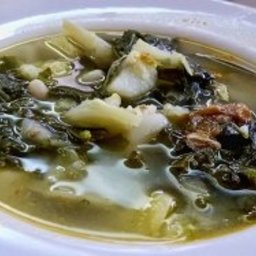