Try this Chocolate Peanut Butter Cupcakes recipe, or contribute your own.

An hour before baking prepare the Chocolate Peanut Butter Filling. Chocolate Peanut Butter Filling: In a small saucepan, heat the cream to boiling. Add the chocolate and sugar, stirring until the chocolate melts. Remove from heat, and beat in the peanut butter until well combined. Refrigerate the mixture until firm but not hard, about 40 minutes. Line twelve 2 1/2-inch muffin-pan cups with paper baking cups. In the top of a double boiler, over simmering water, melt the chocolate and butter. Remove from heat and set aside. In a large bowl, with an electric mixer on high speed, beat the eggs until foamy. Beat in the sugar and vanilla until the mixture is fluffy and lemon coloured, about 5 minutes. Reduce the mixer speed to low, and slowly beat in the chocolate-butter mixture; beat in the flour, baking soda, and salt just until combined. Heat the oven to 350F. Divide the batter among the prepared muffin-pan cups. Using the palms of the hands, roll rounded teaspoonfuls of the chocolate-peanut butter filling into 12 balls. Push one ball into the center of the batter in each muffin-pan cup. (Make sure that the chocolate peanut butter ball is covered by the cupcake batter.) Bake the cupcakes 15 to 20 minutes, or until the center springs back when touched lightly with fingertip. Cool the cupcakes completely in the pan on a wire rack. Remove the cupcakes from the pan. If desired, cover the centers of the cupcakes with a small piece of aluminum foil or paper towel, and sift confectioners sugar over the edges. Remove foil or towel. Store the cupcakes in an airtight container. These taste best after they have cooled completely. Source: Country Baker: Cakes and Cupcakes, (from the editors of Country Living Magazine), pages 38-39. Per serving: 175 Calories; 10g Fat (51% calories from fat); 3g Protein; 19g Carbohydrate; 49mg Cholesterol; 164mg Sodium Recipe by: Marcel Desaulniers From The Chocolate Archives, Dec 1997, http://www.choco.com 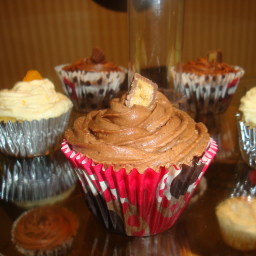