Only ever liked the texture I get from "Cook and Serve" pudding. I do not like the instant. So I had to find a way to make it work with cooked pudding. Still haven't graduated to homemade pudding, but this is what I do.

Mix the condensed milk, half and half and the nutmeg in a microwavable bowl. Cook in microwave until it starts to thicken, 2 minutes at a time. Maybe on the 3rd go you have to start with 1 min at a time. Eventually you get good thickening. Just keep stirring, even if it gets over thick around the edges, it mixes in pretty well.

Let cool slightly, about 5 minutes. Smear a tiny bit of pudding in bottom of container you will use - i use the same glass dish i use for brownies. I think its 9" square.

Place wafers all over the bottom in a layer. Place bananas all over in a layer ...or here and there like i do since I slice super thin and don't like bananas, Ha!

Repeat til there is no more. I had 4 wafers left. I crunched them with a rolling pin and sprinkled them over the top. Also, I was trying to save some half and half for another recipe so i used less, maybe only a cup and added some 1/2% milk to complete the milk/cream mix.

Well, OK, I mixed in half a small tub of cool whip because the pudding mix seemed a little thick and i though adding a little fluff would make it nicer. Could have used the whole thing i think. but anyway it turned out nice.

Place dollops of whipped cream or "cool whip" on top as desired. 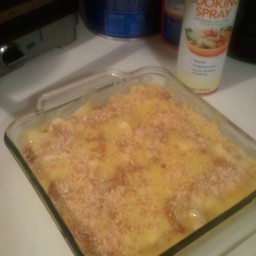 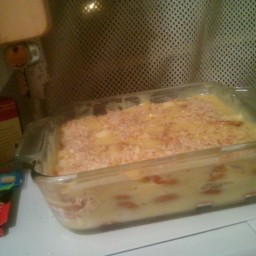