Try this Coulibiac of Salmon recipe, or contribute your own.

MMMMM-----------------------ACCOMPANIMENTS---------------------------- Hollandaise Sauce or melted -butter Parsley Melt 4 T of the butter in a skillet and saute the fish strips lightly for about 2 minutes, until just firm. Season with salt and pepper to taste. Melt the remaining 4 T butter in a second skilklet and saute the shallots and mushrooms until soft, and season with salt and pepper, paprika and chives. Mix the buckwheat with the lightly beaten egg and stir in a third skillet over medium heat until each kernel is separate. Add boiling water, cover tightly and steam for 20 minutes over very low heat. Roll out the brioche dough to a rectangle 14 x 20" and 1/2" thick. Roll it onto the rolling pin and unroll onto a lightly floured cloth or a piece of heavy aluminum. Brush the surface of the dough with melted butter. Put in the center layers of the fish, buckwheat, shallots and mushrooms, sliced eggs and end with the remainder of the buckwheat. Fold the ends and sides of the dough over the filling so that it is completely covered and seal by pressing the edges of the dough together well. Butter a baking sheet large enough to hold the coulibiac and with the aid of the cloth or foil, turn the whoel thing over so that the smooth side is uppermost. Let rise on the baking sheet, in a warm place, for 20 to 30 minutes. Preheat the oven to 375~. Brush the surface of the brioche with beaten egg. Cut a center vent in the top for the steam to escape. Bake for 30 to 40 minutes or until the brioche is nicely browned and cooked through. Slice and serve with hollandaise sauce or melted butter and accompany it with a bowl of chopped parsley. SOURCE: The New James Beard. Pub. by Alfred A. Knopf, NY 1981 P. 214 Formatted by Carol Kaplan ACGR23B for Prodigy Food Forum 11/18/95 Recipe by: THE NEW JAMES BEARD P.214 Posted to MasterCook Digest by Nancy Berry 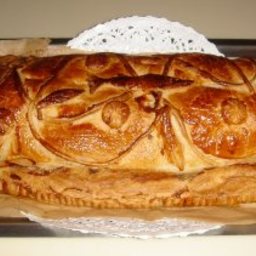 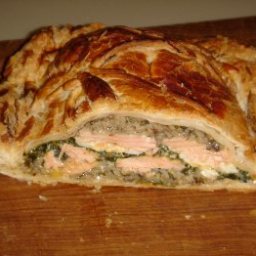