This meal is simple, uses one pan and few ingredients. A bag of perogie, a head of cabbage, an apple, an onion, a stick of butter and a couple ham steaks. What I made is enough for two meals and will feed 6 to 8 all at once. Simply delicious!

1 Boil the bag of pieroghies in pan of boiling water. Swish them around and when they float to top they are done then take them out lay on inverted lid to skillet that is held up on a bowl. Dump the water out. Now saute in the butter back in empty skillet that has melted butter in it. Usually takes 2 rounds to saute all of them. Don't over fry. Just golden brown on both sides.

8. Melt butter in skillet and saute the onions & apples. Next add the chopped cabage to the mix. Toss it around & add salt put the lid on and for about 5-10 minutes till it starts to wilt in the skillet. Add sliced ham steaks to cabbage mix. Steam with lid on and then serve on a plate with your sauteed pieroghies. Engoyum! 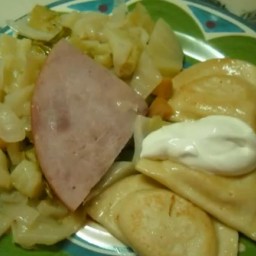